The municipality of Brumado registered twelve more cases of infection by the coronavirus, this Tuesday (29). According to the Epidemiological Bulletin of the Secretary of Health, there are already 1,513 confirmed cases of the disease in the city.

Of the registered cases, there are 07 people hospitalized, 210 patients with the active virus and 1,286 recovered. Another 84 people are awaiting the results of a laboratory test. 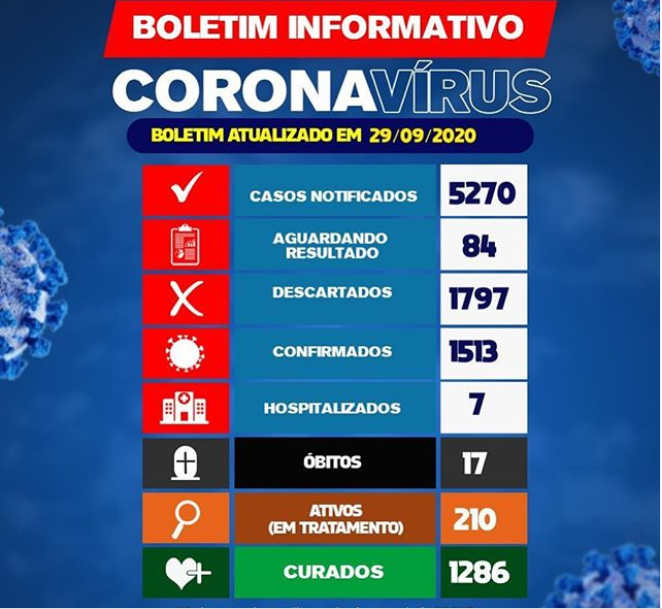 In addition, 17 deaths were confirmed in Brumado’s patients, due to Covid-19 complications. The latter was confirmed on Monday (28).

Suspicious reports cover patients with different flu syndromes, among which some fit the criteria for carrying out the RT-PCR exam or via rapid test.

Deaths by Covid-19 in Brumado

The first death occurred on June 1, at the Covid-19 Service Center. The victim was a 50-year-old woman and according to the health department, she was diabetic, hypertensive and obese. The victim would be transferred to a health unit in the municipality of Vitória da Conquista, however, during the transfer, already on the way out of the city, he did not resist and died.

The second death due to Covid-19 occurred on June 10. The victim was a 77-year-old man who could not resist the complications of the disease. He was admitted to the Intensive Care Unit (ICU) in Vitória da Conquista.

The third death occurred on June 14. The patient was 61 years old and was hypertensive and had a heart disease. He was a resident of the community of Lagoa Funda, rural area of ​​the municipality and was admitted to the Hospital das Clínicas de Conquista (HCC).

The fourth death was confirmed on July 30. The patient was 88 years old and was admitted to the General Hospital of Vitória da Conquista, where he died on the 20th of this month.

The fifth death was confirmed on August 5 and the city did not release information about the victim.

The sixth death was confirmed on August 11. The victim is a 77-year-old man with a history of active Alzheimer’s disease and previous prostate cancer. He was hospitalized by Covid-19 at the Fonte Nova Campaign Hospital in Salvador.

The seventh death was registered on August 13 and the victim was a 71-year-old man.

The eighth death was confirmed on August 19. this is a 75-year-old man with a history of heart disease.

The ninth death was registered on August 21. This is a 76-year-old woman. She has had symptoms of the disease since July 7 and was admitted on July 14, the day before she was diagnosed with Covid-19. She was hospitalized, being treated at a referral hospital in Salvador, since July 18.

The tenth death was registered on September 2. The victim was a 71-year-old woman who was hypertensive and had heart problems. The patient began to experience symptoms on August 15, then was seen at the UPA 24h and transferred to an Intensive Care Unit (ICU) in Vitória da Conquista. She died on Monday (31).

The 11th was registered on September 3. The victim was an 88-year-old man. He died last Tuesday (1st).

The 12th was confirmed on September 5th. The Health Secretariat did not provide details such as the patient’s age, sex and history of comorbidities, nor about the place of hospitalization.

The 13th and 14th were confirmed on September 10th. The Health Department did not provide details about the victims, such as sex, age, comorbidities, time and place of hospitalization.

The 15th death was registered on September 13. The folder did not provide details about the victim, such as sex, age, comorbidities, time and place of hospitalization.

The 16th was confirmed on September 27th. The Health Department did not provide details about the victims, such as sex, age, comorbidities, time and place of hospitalization.

Know what are the types of vaccine against covid-19

Pedro Abrunhosa sings in a mask at a concert: “I felt...

Instagram turns 10 and we gathered some curiosities of the app

BDRs record trading records after B3 grants access to individuals; ...

Specialist explains what is positive psychology in Revista Brasil