From OPEC, the oil exporter cartel, to Vitol, trading of energy, the verdict seems to be the same: black clouds hang over the oil market.

What is not clear is what downward pressure this will have on prices in the short term.

The same applies to gold: the yellow metal is close to the two-month lows, with the graphs indicating a greater weakness. But, as everything indicates that the dollar will return part of its impressive gains in the last two weeks, it is not yet known how far gold may fall.

Two points of attention in the gold / macro negotiations this week: the first will be the debate between President Donald Trump and his opponent Joe Biden, on Tuesday, in the November 3 election race, and those referring to September, whose disclosure it will be on Friday.

As if that weren’t enough, US data, released on Friday, showed that speculators held large short positions in the US currency, close to the highs of nearly a decade.

“The feeling of risk and the dynamics of the dollar in the US will continue to dominate the market, given the persistent risks of coronavirus and uncertainty about fiscal stimulus in the USA.”

Back to oil: Mohammad Barkindo, secretary general of the Organization of Petroleum Exporting Countries (OPEC), said during the G20 virtual energy ministers meeting that commercial oil stocks in the developed world could remain above the average of five years in the third quarter of this year.

“The expectation of supply and demand is that commercial stocks in the OECD will be well above the average of the last five years in 3Q2020.”

Barkindo said, referring to oil storage in rich countries gathered at the Organization for Economic Cooperation and Development.

The OPEC secretary-general, however, expects oil stocks in the OECD to fall in the fourth quarter, reaching about 123 million barrels or slightly above the five-year average.

Vitol, the world’s largest independent oil operator, sees little room for an oil rally during the fourth quarter, as global demand is slowing due to restrictions related to the coronavirus, according to Bloomberg. Chris Bake, member of the Vitol Group executive committee, stated:

“The general belief was that, in the fourth quarter, things would get better. I don’t think we’re going to have a big catalyst, and the demand is more uncertain. “

Several European countries have recently re-imposed restrictions on travel and social gatherings, due to a resurgence of coronavirus cases across the continent.

Oil prices recorded their third weekly devaluation on Friday, given the warning by analysts that the situation would be more unfavorable for the market in the short term, after an unexpected surge in Libya’s production, now without political barriers, has increased concerns about demand.

Since the OPEC + meeting in mid-September, which more or less confirmed production cuts until the end of the year, oil prices have fluctuated on both sides.

The notion that production cuts could improve the market balance gave support to the product, further aided by the withdrawals registered in the.

What weighed on the market was the unexpected peace deal between rival factions in Libya, which could inject up to a million more barrels into the market.

National Oil Corp, a North African state-owned company, said it expects to increase production to around 260,000 barrels per day (bpd) by next week. Before the release of its ports and oil fields by Haftar forces at the end of last week, the country produced only 100,000 bpd.

Libya’s total production could reach 550,000 bpd by the end of the year and around one million bpd by mid-2021. All of this from a country that hasn’t exported a single barrel since January, due to the civil war declared by Haftar. At the peak of 2008, Libya produced around 1.8 million bpd.

The changing market dynamics may force OPEC to redo its plans in view of this new and unexpected offer. Marco Dunand, cofounder and CEO of Murcuria, told Bloomberg:

“We are seeing a considerable amount of oil being shipped in floating stocks right now. We are using the full capacity of tankers for storage, as well as tanks on land, in September. The global rebalancing process has slowed down ”.

News surfaced earlier this month that traders of commodities were recording the use of more tankers to store oil. This ended up raising the concern that we could repeat what happened in the first half, when hundreds of millions of barrels of unsold oil were being dumped into tankers, as the onshore storage tanks were full. After the end of the confinements, oil sales began to improve, except for jet fuel, which was the component of the lot that registered the worst demand.

Gold had its worst week in 6 months

Gold, meanwhile, is leaving its worst week in six months, after devaluing almost 5% and suffering a dollar noucate, which again won in the last round of global risk aversion.

“This was a week that gold investors will want to forget, the worst since the downturn caused by the coronavirus turnaround in financial markets in March.”

Affirmed Rajan Dhall, another graphic artist specialized in gold, in a publication in site FX Street on Friday.

“The indicators are still bearish. The Relative Strength Index is still in the oversold region “.

Although the last week has not been a good one, both measures of gold show an average gain of 20% in the accumulated result for the year.

Gold may fall further, depending on debate on Tuesday and US jobs report

For gold investors, this was a reflection of the metal’s strength in the face of adversity. For those sold, it was a sign that it was still possible to profit a lot from the sale of yellow metal, in the wake of the surge in the dollar.

After the initial dip in March, when it melted together with the shares in a liquidation triggered by the covid-19 confinements, gold started to register a phenomenal upward movement. 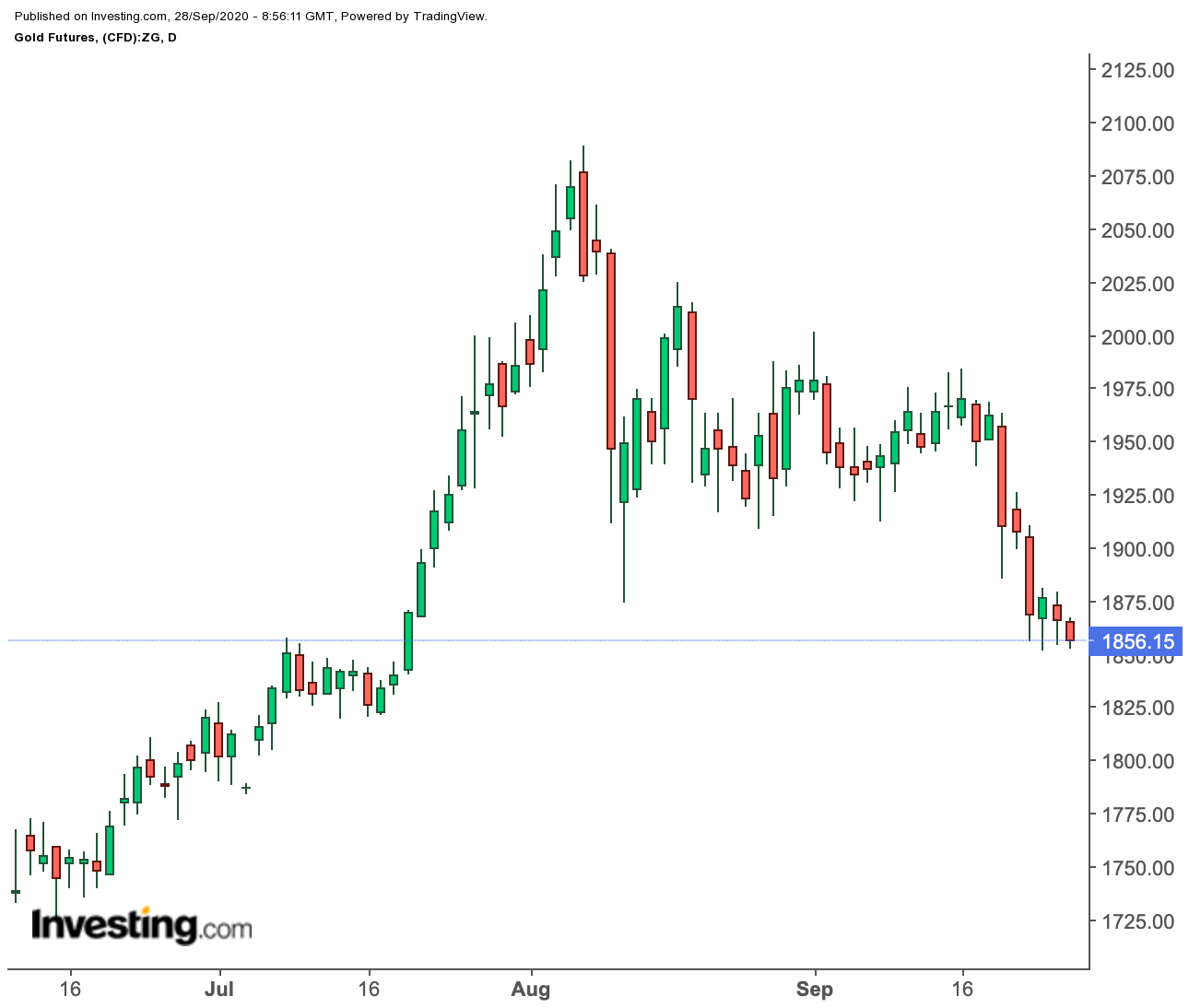 But it has met with strong resistance since then, as the weakness of other currencies and the intensification of tensions between the US and China boosted the dollar as preferential protection.

“We are seeing the configuration of a risk aversion environment, that is, the dollar will continue to strengthen, with a lot of pressure on gold prices in the short term”.

The, or DX, which tracks the performance of the American currency against six currencies, depreciated 0.2% at 94.537, from the two-month high to 94.795 recorded on Friday. DX rose 2% in the week and about 3% in the month, although it still declines by more than 1% in the year.

The graphs show that the strength of the dollar should support it above the 94 level this week, mainly with the presidential debate on Tuesday and employment data on Friday. 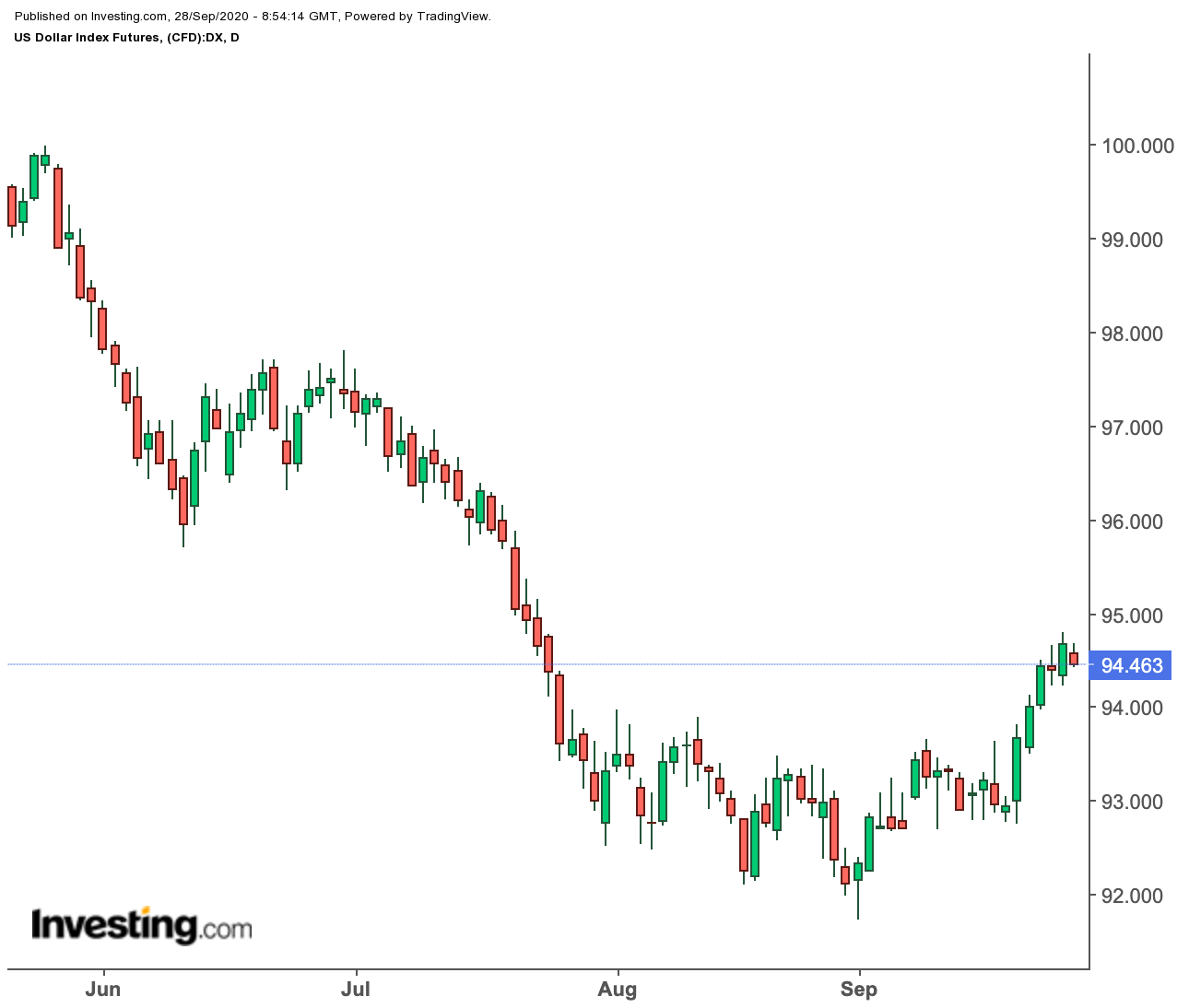 The dollar could skyrocket if Biden, who is leading the polls, performs well in the debate. The US currency may also continue to rise if September’s non-farm payrolls are above the 850,000 forecast after the 1.37 million jobs created in August.

BCP shoots more than 5% after results. It is the biggest gain in 4 months – Bolsa

Okay! Digital social savings Free cash will have a limit of up to R $ 5,000

Near halving for Petoro so far this year – E24

3% of the more than 800 satellites ever launched are defective

Portuguese economy drops to 5.8% in the third quarter – Economy

Greeted and hugged in Rosehagen – now Chris Christie is hospitalized...

– Hope there is more muscle than fat

Petrobras should spend around 6 billion dollars on decommissioning plan for...

Sandra Annenberg and Ernesto Paglia celebrate 26 years of marriage: "I...

You will have to wait a long time for the Xbox...