The government pointed out that there was an increase in cases and hospitalizations by Covid-19 in Manaus, but ruled out the occurrence of a second wave of the disease. The most significant growth in hospitalizations occurs in the private network, according to the government.

See what is prohibited until October 26:

What can work, with restrictions:

The Amazon lived first wave of Covid-19 between April and May, when the capital’s public health system collapsed. At the time, the number of deaths in Manaus was 108% above the historical average.

On June 1, the government started easing the quarantine, considering the drop in the number of admissions by Covid-19. The decree allowed the return of non-essential trade, through four cycles.

The four cycle, which started on July 6, included authorization for bars and floats to operate. From the 27th of July, the opening of leisure, sport and culture activities in the state was also allowed.

Schools in Amazonas were the first in the country to reopen their doors. Private school units returned on July 6, and state schools returned with face-to-face classes for high school, only in the capital, in August.

With the relaxation of the quarantine, Manaus started to have days and nights with records of agglomerations at several points. Bars were found to fail to comply with protection measures and 150 were closed as a result, until Tuesday (22).

The Ponta Negra Tourist Complex also registered an intense agglomeration of people after the reopening. The site was the first to have the opening suspendedon the 18th of this month.

On the 11th, at a press conference, the government reported that it registered a “slowdown” in the reduction of cases in Manaus, and pointed out that agglomerations were responsible for the increase in cases. The private health network registered an increase in the number of hospitalizations.

Now, with the new restriction measures, the government has authorized the application of fines to establishments caught in breach of regulations. The population can report cases of non-compliance through the 190. Among the penalties provided for, are: 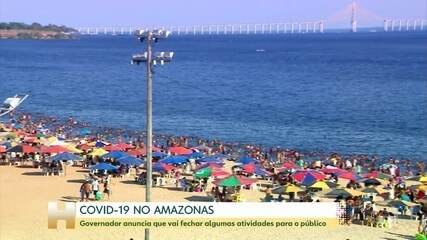 Pandemic to strengthen Chinese power in the economy

Ipatinga registers another death by covid-19

Covid-19: The states with the lowest number of cases per 100 thousand inhabitants

Lives from the Health Department come to an end

Link Mobility will make a comeback on the Oslo Stock Exchange...

Work of the new Unimed Hospital enters the final stretch –...

Smell training can fight one of Covid-19 symptoms

It is important to take it seriously

Coronavirus is an even greater danger to the brain than previously...