The Galaxy Note 20 Ultra is the best phone launched by Samsung in 2020, but can it beat the best smartphone of 2019? We put the Korean phablet to face the iPhone 11 Pro Max. Read through to see who will win in this dispute.

Seeing the two side by side it is clear that the Galaxy looks like a more current product. It has thinner edges and a small hole-shaped notch. Its screen is more curved at the edges, which gives the device greater elegance, but compromises the footprint a little. It is bigger, but lighter than the Apple.

Apple claims that the iPhone has the toughest glass, but that was in 2019. The Note 20 Ultra debuts the new generation of Gorilla Glass that proved to be tougher in the fall. At the rear we have a leaped set of cameras on both, with a larger block on the Galaxy. Its glass also has a matte finish, but only in copper color.

Apple and Samsung bet on IP68 certification, but the Korean guarantees protection only up to 1.5m deep, while the rival claims that its cell phone survives up to 4m underwater. Of course, it is good not to abuse it as the warranty does not cover liquid damage.

In terms of embedded technologies there is not much difference. The Galaxy has a biometric reader on the screen and the iPhone only facial. If you are looking for a P2 input, forget it, but the Note 20 Ultra has a more agile USB connection and a microSD slot.

We started the comparison with a point for the Note 20 Ultra. 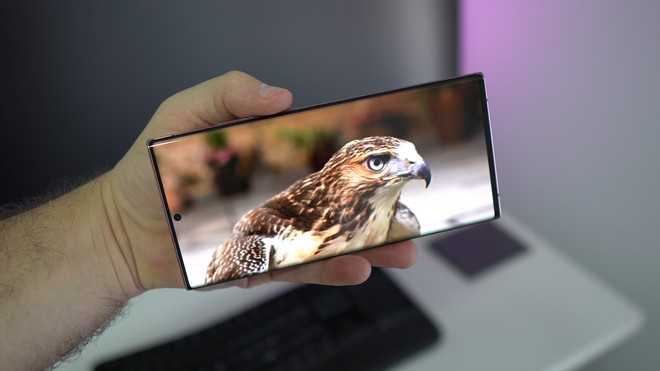 Samsung is the queen of OLED screens, but we know that it also provides panels for its biggest rival. However, the Note 20 Ultra brings a newer screen with brighter brightness, better color reproduction and 120 Hz. The iPhone has only 60 Hz, which prevents displaying animations or games running at 120 fps.

Of course, a 120 Hz screen uses more energy, but the Note 20 Ultra can adjust the panel speed according to the content displayed. So you can have greater fluidity without worrying about the battery.

There are stereo speakers on both. The iPhone reproduces louder sound, but the Galaxy has more balanced audio. Samsung did more on the bass this time, avoiding that dry sound that we saw in previous generations. It is much more pleasant to hear music on it than on the iPhone.

The headset that comes with it is the same as always from AKG with USB-C connection. It is more comfortable and has a slightly better sound quality than the Apple accessory that comes with the 11 Pro Max, however when using a high quality headset on both, you will have a similar sound experience.

We give double victory in multimedia for the Galaxy. 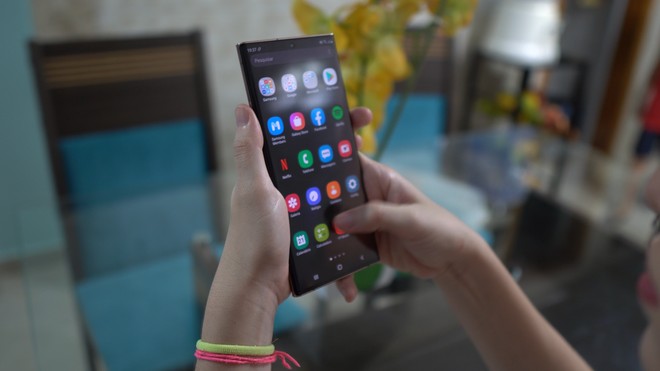 Which has the best system? Samsung has been improving the One UI with each new release and we currently have something that comes close to the fluidity of iOS, but the iPhone still stands out in that. Another point that Apple takes advantage of is support with updates for more than 4 years. Samsung has been trying to keep up and promises three major versions of Android for the Note 20 Ultra.

Now if you are looking for the most feature-rich cell phone, this is where the Galaxy takes a bath in the rival. AS Pen adds several extras that enhance productivity and even allow you to control your phone remotely. If you need a computer you can connect the Galaxy Note 20 Ultra to your TV via Wi-Fi and use the Samsung Dex to work or play.

We will give each one point in software. 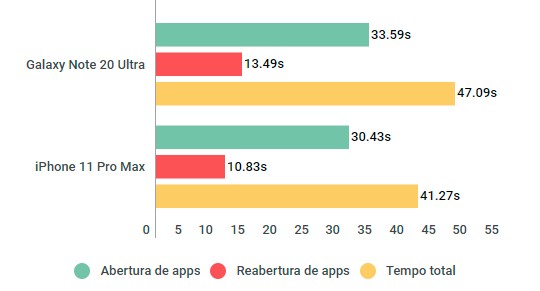 The Galaxy Note 20 Ultra reuses the hardware of the S20 line, which as we saw in previous comparisons of TudoCelular, ends up losing to Apple’s A13 Bionic. And it is no different with the new launch from Samsung, it happens mainly in our multitasking test with the 11 Pro Max being a few seconds faster when opening apps and games.

In benchmarks, we have mixed results. The iPhone wins in some and the Galaxy in others. In AnTuTu we reached a difference of 15% advantage for the Note 20 Ultra. In games it also stands out in some titles for delivering 120 fps, but, unfortunately, they are few. Most games run at the same frame rate per second on both.

We give each one point in general performance. 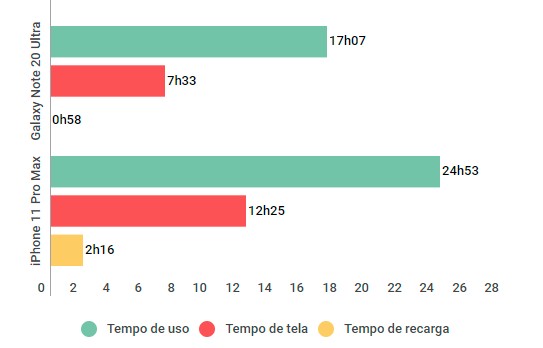 The Galaxy Note 20 Ultra reuses the hardware of the S20 line, which as we saw in previous comparisons of TudoCelular, ends up losing to Apple’s A13 Bionic. And it is no different with the new launch from Samsung, it happens mainly in our multitasking test with the 11 Pro Max being a few seconds faster when opening apps and games.

In benchmarks, we have mixed results. The iPhone wins in some and the Galaxy in others. In AnTuTu we reached a difference of 15% advantage for the Note 20 Ultra. In games it also stands out in some titles for delivering 120 fps, but, unfortunately, they are few. Most games run at the same frame rate per second on both.

We give each one point in general performance.

In our comparison of cameras that brought together the iPhone 11 Pro Max and the Galaxy S20 Ultra we saw that Samsung’s 108 MP could not beat Apple’s 12 MP. Has that changed now on the Note 20 Ultra? What we notice is that Samsung has made some improvements and we see the Galaxy outperform the iPhone in several scenarios.

The Note and the iPhone record great photos by day. The Galaxy saturates the green and red tones more, while the rival leaves the photos slightly yellow. The Note 20 Ultra takes the best out of HDR in photos taken in the late afternoon and captures clearer images with the ultra-wide camera. And if you want to photograph something that is far away, you will have clearer images on the Galaxy with its 50x zoom.

The iPhone still wins out in darker settings. It suffers less with noise and has less loss of sharpness. Both have great night mode to rescue details of photos devoured by darkness, however on the Galaxy you can do this also with the ultra-wide and you will have much clearer photos than on the iPhone.

Both have a good portrait effect with a well done cut and sharp blur of the backdrop. The iPhone, on the other hand, continues with its mania to give a tan tone to the skin, and many enjoy the result.

Samsung may have improved its rear cameras, but the front still loses to Apple. The iPhone 11 Pro Max is better for selfies. He does not suffer from the soothing effect of Samsung that hides skin defects in exchange for killing small details that enrich the photos. At night we have clearer selfies on the Galaxy, but more grainy.

We stitch the iPhone in selfies.

Note 20 Ultra is capable of shooting in 8K and the iPhone only in 4K. What matters is that they both have great shooting quality, loud and clean sound, few shakes and an agile focus. The iPhone is even better for shooting at night, whether with the rear or front camera. Videos have less noise and artifacts.

The front of the iPhone has more efficient stabilization and slow motion footage. The Galaxy has blur effect on videos, however the feature is flawed and often blurs where it shouldn’t.

We closed the point camera for the iPhone.

Both were launched for R $ 8,000, but as the iPhone is older it can be found cheaper today, not to mention that it devalues ​​less than Samsung phones. Do not be surprised to see the Note 20 Ultra cheaper than the 11 Pro Max in 2021. Until then, the Apple model is the one that delivers the best value for money.

In our comparison between the Galaxy S20 Ultra and the iPhone 11 Pro Max we had victory for Apple, but Samsung went for it and brought a better phone to the market that now competes equally with the top of the line from its biggest rival. But we are comparing a 2020 phone with a 2019 phone, can Apple turn the game around with the iPhone 12? We’ll see soon.

But now what to buy? Let’s summarize everything we saw in the comparison: if you prefer updated design, superior multimedia experience, full-featured system, fast recharging battery and more functional camera set, then it is the Galaxy Note 20 Ultra that should be chosen.

Now if you are looking for a more compact phone, with better multitasking performance, battery that lasts longer, updates for several years, better selfies camera and less devaluation in the long run, then go for iPhone 11 Pro Max.

Learn how to play Among Us in first person

Airdots-like headphones on offer at Gearbest

This week’s releases for PS4, Xbox One, Switch and PC

Rumor. James Bond may be on his way to Netflix or Apple TV +

‘He told me it’s Mirella’

Unemployment insurance claims fall 9.3% in the first half of September

Image leak. Is this the 11th generation of the Honda...

Ministry of Health updates information on coronavirus in Brazil

The Farm: Lipe wins the Trial of Fire

The top football manager admits the lack of routines in racism...