A Lynk & Co, a brand of electrified vehicles created by the Chinese company Geel and its subsidiary Volvo, presented on Wednesday, 30, the SUV 01, its debut model in Europe. Along with the SUV, the brand also revealed a subscription system that allows sharing with other subscribers to the service and even subleasing the car through the brand’s platform.

The subscription of the SUV 01 in Europe will cost around € 500 monthly, already with the option of renting the vehicle to other members associated with the Lynk & Co. service. The company admits that customers can even profit from the vehicle, if they can sublease frequently.

“We are offering a radical solution for a new generation of connected customers who want mobility on their own terms. The automotive industry continued with a distribution and ownership model that has existed for 100 years. We are changing that. Our goal is to simplify ownership by innovating and redefining how cars are bought, purchased, connected, serviced and used. We exist to change mobility forever”, Said Alain Visser, CEO of Lynk & Co International, who has accumulated tickets through several other automakers.

The first 01 hybrids and plug-in hybrids will begin to run in European cities from April 2021, five years after the emergence of Lynk & Co. To run with one of them, consumers will be able to buy them online or offline – the price for European markets will be revealed in the coming weeks, but in China it costs about $ 24,000 – online or offline or to subscribe monthly or pay for use through the Lynk & Co. app. 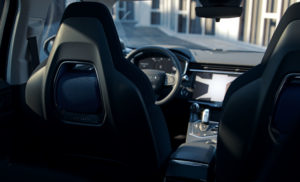 Once with the vehicle, the subscriber will be able to define prices and conditions for the sublease of the vehicle, including pick-up and drop-off locations. It is possible to share the digital key for other members to use the rental car.

The monthly fee can also be divided among several people – allowing them to share a single car – and includes insurance and maintenance at Volvo’s dealer network. The subscription can be canceled one month in advance, even those already paid.

The European version of SUV 01, derived from the Compact Modular Architecture (CMA) platform, the same as the Volvo XC40, has already brought technical and aesthetic modifications in relation to the model sold in China about four years ago.
It will have a hybrid engine and another plug-in hybrid, which ensures 70 km of autonomy only with electricity, and interior covered in material made from recycled fishing lines. There are no options, the customer’s only choice will be the color and the engine.

Connectivity is another highlight of the 01. It has online browsing, third-party applications, social media camera and its own cloud. Through it, Lynk & Co can check the condition of the vehicle, solve problems and notify the member of the scheduled maintenance time. All included in the subscription price.

Lynk & Co will also have a physical presence in the main cities of seven European countries, but, instead of traditional dealerships, through what the company prefers to call “clubs”, a social center, shopping and events for associate members. The first will open in the coming weeks in Amsterdam, the Netherlands, and the second just before the end of the year in Gothenburg, Sweden.

The Enemy – Switch version of XIII Remake postponed to 2021

DeGrasse Tyson: asteroid could hit Earth the day before US elections

Asteroid could hit Earth the day before US election

Are you an Xbox Game Pass user? Rainbow Six will be free! Leak

2000 without electricity in Troms – VG

Lineker’s viral tweet after learning that Ibrahimovic has covid-19

Concern over lockdown risk causes Ibovespa to fall more than 2%

Diabetes and cough? 4 curiosities about the health of Pets...

Supreme Court and covid-19 are subjects of the 1st debate between...

Court determines the end of the postal strike – Jornal CORREIO