A few hours ago, at the ‘Battey Day’ event, Elon Musk announced several new features, including a new version of his best car, the Tesla Model S Plaid. This is a variant with more performance than the Model S. According to what was announced, this new electric will have a range above 830 km and a maximum speed of 320 km / h.

In addition to these new features that are flags for this ad, there are other very interesting ones to “relaunch” interest in Tesla.

Tesla starts to receive more and more competition in the various vectors where it has excelled. Incidentally, it seems that Elon Musk did not like that Lucid Motors declared a range of more than 830 kilometers on its Lucid Air. Nor should he have been satisfied to learn that this electric was pointed out as the fastest in certain tests where Tesla it had been an excellent time.

Thus, during the last night, on the occasion of Battery Day, Tesla unveiled new designs and products, including a new version more focused on the performance of its most representative electric, the Tesla Model S Plaid. 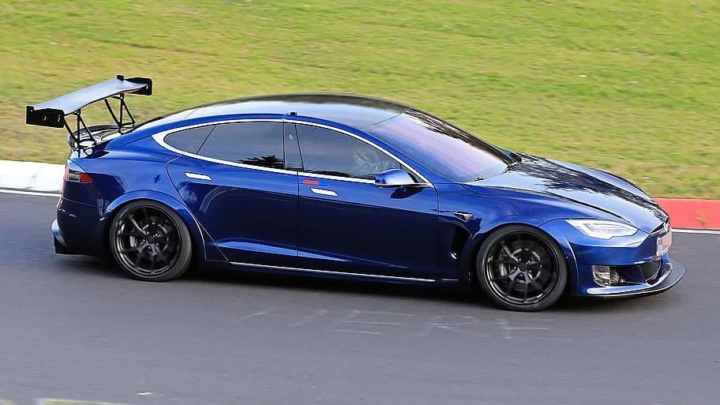 Elon felt the touch of his competitors

It was on September 9 that Lucid Motors presented its first electric car, the Lucid Air. This brought the premise of being the production electric car capable of projecting greater autonomy. On the other hand, Porsche with its Taycan Turbo S also seems to have removed the throne of the fastest electric model from the Model S Performance.

Tesla later returned to the circuit that serves as the basis for tests, took the Tesla Model S Plaid to the Nürburgring and some say it managed to take a few seconds off the time achieved by Porsche.

With his two main rivals claiming the podium, Elon Musk could not sit idly by. In this sense and as it was already a version that gained fast status, the American company decided to announce a new version of the Tesla Model S, called Model S Plaid.

What is new in this renewed electric car?

The Model S Plaid will be a version with even more performance than the Performance. It has a triple engine, all-wheel drive, and with, supposedly, a bigger battery that will be used to travel more distance.

The data announced by Tesla show a car that goes from 0 to 100 km / k in less than 2.1 seconds. In addition, it can cover 400 meters in less than 9 seconds. Thus, the Tesla Model S Plaid is pushing the competition again in the aspects that have characterized this market. It is fast, agile and with excellent autonomy.

There is still little information about the battery, but we will certainly return to the topic. If you are interested in buying the vehicle, know that you can already do it in Portugal. As you can see on the Tesla website, this is available for order at a price of € 140,990 and will be delivered, estimated, at the end of 2021.

Oil sinks to May lows, stock markets fall and Lagarde takes Portugal interest to August 2019 levels – Markets in a minute

Equinor, Canada | Equinor in oil sands trouble in Canada: Can get a new bill of 3.3 billion kroner

CAIXA releases another batch of FGTS withdrawals of up to R $ 1,045 the day after tomorrow

Covid-19: Moderna says it will request emergency vaccine use in the US

Uber drivers will be able to choose travel prices. Can charge up to double the normal – ECO

Bruno Fernandes started on the bench and Solskjaer explained why

Association of General and Family Medicine warns of possible rupture of...

Amrica ties goalless with Chapecoense and remains out of Srie B’s...

see which numbers and teams were drawn today

Donald Trump, a character and a television ego | USA...

Leonardo and his wife celebrate 24 years together: ‘I went through...