In a speech recorded and presented this Wednesday (30) at the United Nations (UN) biodiversity summit, President Jair Bolsonaro stated, without showing evidence, that organizations, in partnership with “some NGOs”, command “environmental crimes” in Brazil and also abroad.

Bolsonaro was one of the heads of state who sent a recorded speech to the UN, for the summit that took place within the events of the general assembly, which this year was held virtually due to the pandemic of the new coronavirus.

Last week, in a speech at the United Nations (UN) Assembly, Bolsonaro had already said that Brazil is a “victim” of a “brutal” campaign of disinformation about the Amazon and the Pantanal.

“In the Amazon, we launched ‘Operation Green Brazil 2’, which has so far managed to reverse the trend of increasing deforested area observed in previous years. We will continue this operation to further intensify the fight against these problems that favor the organizations that, associated with some NGOs, command environmental crimes in Brazil and abroad ”, said Bolsonaro.

Bolsonaro did not provide evidence or cite the names of NGOs that are behind environmental crimes.

This is not the first time that the president has accused NGOs of environmental crimes. In August last year, he declared that organizations could be behind burning in the Amazon region to “call attention” against the government of Brazil.

At the time, questioned whether there was any basis for the allegations, Bolsonaro said there were no written records of the suspicions.

The president again affirmed, in the video released this Tuesday, that Brazil is sovereign in the portion of its territory covered by the Amazon rainforest. He rejected what he considers “international greed” about the area.

The Bolsonaro government has been the target of criticism, inside and outside the country, due to its environmental policy and data that point to increased deforestation in the Amazon. The fires, which have been consuming the Pantanal, also contributed to the increase in international pressure on the Brazilian government.

Researchers participate in a task force to account for animals killed by burning in the Pantanal. – Photo: Semagro / Disclosure

In response, the president and his assistants have stated that the criticisms are part of an international movement to destabilize the government and also come from countries that have a commercial interest in harming Brazilian agribusiness.

“I vehemently reject international greed for our Amazon. And we will defend it from actions and narratives that attack national interests,” he said.

“We cannot accept, therefore, that false and irresponsible information can serve as a pretext for the imposition of unfair international rules, which disregard the important environmental achievements that we have achieved for the benefit of Brazil and the world,” he added.

Earlier on Tuesday, on his social networks, Bolsonaro responded to a statement by Democratic party candidate for president of the United States, Joe Biden, about deforestation in the Amazon.

In Tuesday’s debate (29), Biden defended to form a fund of R $ 20 billion to help Brazil preserve the forest and, if deforestation were not stopped, the country would have “significant economic consequences”. 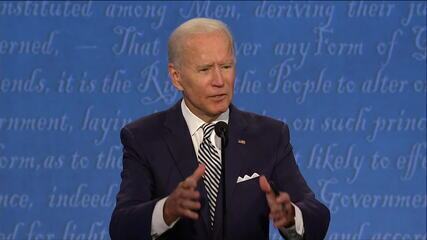 Tropical forests in Brazil are being destroyed, says Biden

“What some have not yet understood is that Brazil has changed. Today, its president, unlike the left, no longer accepts bribes, criminal demarcations or unfounded threats. Our sovereignty is non-negotiable,” said Bolsonaro.

The president said that a partnership with the United States is “welcome”. But, according to him, Biden’s statement “clearly signals giving up a cordial and fruitful coexistence”.

The president defended actions in the bioeconomy, to marry environmental preservation and development, and mentioned in his speech the situation in the Pantanal, punished by weeks of burning. According to Bolsonaro, the government has adopted measures to combat “fires in a coordinated manner”.

“In the Pantanal, we have strengthened the integration between government agencies, with the support of the Armed Forces, to act in a coordinated manner and, thus, fight the fires around this region. This shows that we maintain our commitment to seek sustainable development of the country, supported by agriculture based on biotechnology, of proven efficiency, and also in the preservation of our environmental heritage “, he declared. 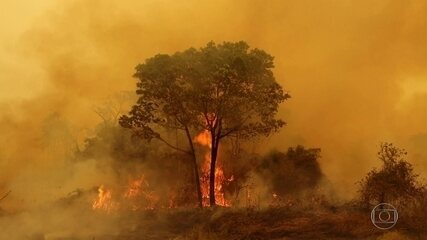 Like other speeches on environmental preservation, Bolsonaro highlighted food production in Brazil. According to him, agribusiness increases production capacity and reduces the environmental impact.

“In the last few decades, the Brazilian agricultural sector has achieved significant increases in productivity and has proven its capacity to expand its production and feed the world, while reducing its already negligible impact on the environment”.

“We have an obligation to preserve our biomes and, at the same time, we need to face complex social adversities, such as unemployment and poverty, in addition to seeking to guarantee the food security of our people,” said the president.

“In 2020, we moved in this direction and, despite facing a difficult and atypical situation due to the coronavirus, we reinforced surveillance actions on our biomes and strengthened our means to combat the degradation of ecosystems, external sabotage and biopiracy,” added Bolsonaro.

Last Tuesday (29), the Federal Court of Rio de Janeiro suspended Conama decisions that removed protection from mangrove and restingas areas. In the decision, the judge said that overturning resolutions is “an evident risk of irretrievable damage to the environment”.

On September 18, after receiving a report on deforestation, France once again opposed the trade agreement between Mercosur and the European Union. According to the report, the environmental cost of the agreement would outweigh the economic benefits.

In July, executives from 38 large Brazilian and foreign companies sent a letter to Vice President Hamilton Mourão, who chairs the Amazon Council, calling for concrete actions to combat deforestation in the country.

Entitled “Communiqué of the Brazilian Business Sector”, the document was also signed by four sectorial entities in the agribusiness, financial market and industry.

Therefore, she responded to the breach report

Scientists discover a new organ in the human throat

Toxic players and cheats have their days on PlayStation 5

Tesla. Price of the automatic driving package goes up again...

THE BALL – Heat pass Celtics and meet LeBron and the...