MIUI 12 is not exactly a novelty on the market, and there are currently dozens of Xiaomi devices that have already been updated to the latest version of the system. Unfortunately this is not what happened with the Redmi Note 9 Pro, which is still waiting for an update.

Whoever owns a Redmi Note 9 Pro eagerly awaits the arrival of the new MIUI 12 in the stable version, but unfortunately the device has not yet received the update. However, the company has now come to confirm that the update may be coming soon.

First of all, it is necessary to clarify that there is the Redmi Note 9S in the Indian and Chinese market, where there is already an update for MIUI 12. However, the global version of Note 9 Pro, which should be the model that most users in Portugal they do not have this update officially yet. 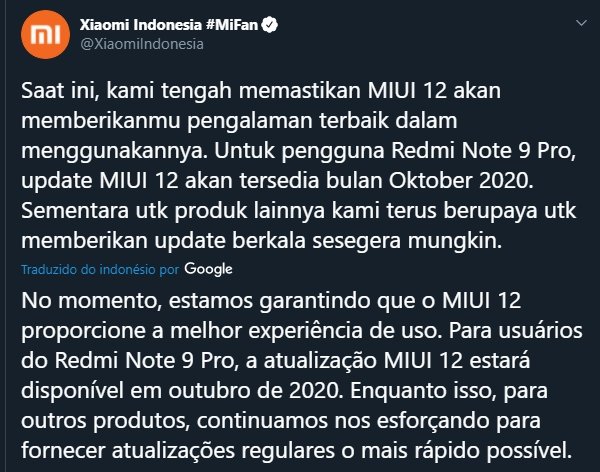 Note that testing of this new version of the system on the device has been taking place in recent weeks, but there is still no official way to install the stable version of MIUI 12 on it. For users, it is recommended to wait for more news until October, the expected date of availability.

50th Anniversary of the Harley-Davidson XR750

CoD Cold War: PS4 and PS5 will have an exclusive zombie mode

OnePlus Nord N100 will be presented tomorrow and comes with a price that you will like!

Desalma, GloboPlay’s new series, will have terror, magic and mysteries; ...

Anette Stokke: – The “Shall we dance” winner will be a...

Playstation 5: Japanese Youtubers have already tested the new console and...

Against Lava Jato, Gilmar shields Aras and defends PGR from outside...

Luana Piovani is with Covid-19: “I’m covidiana and locked in my...