Senator Chico Rodrigues (DEM-RR), caught on Wednesday (14) with money in his underwear during a Federal Police operation, asked this Friday (16) to be removed from the mixed Congressional committee that tracks federal spending to control the Covid-19 pandemic. Rodrigues is an alternate member of the commission.

The operation that the senator was targeted for had precisely the objective of dismantling a millionaire scheme of embezzlement of public resources that should have gone to fight the new coronavirus.

According to the PF, there is evidence that Chico Rodrigues committed a crime of money laundering and embarrassing the investigation of a criminal organization.

On Thursday (15), the Minister of the Supreme Federal Court (STF) Luís Roberto Barroso determined that the parliamentarian be removed from office for 90 days. But the Senate floor needs to endorse the decision. The President of the House, Davi Alcolumbre (DEM-AP), from the same party as Rodrigues, said that he will wait for the document of Barroso’s determination before taking any measures.

The request to the Covid-19 committee was made by the senator directly to the committee chairman, Senator Confúcio Moura (MDB-RO). In the message, the congressman only “requests the termination” of the commission, without giving details.

Although the name of Chico Rodrigues is no longer among the members of the committee in the Senate system, the press office of the collegiate presidency informed that it is necessary that the Vanguarda bloc, composed of the DEM, PL and PSC parties, formalize the request.

Chico Rodrigues has a vacancy as an alternate on the commission for the bloc. Until the block makes the request, the disconnection will not be formalized.

The adviser to Senator Wellington Fagundes (PL-MT), leader of the Vanguarda bloc, informed that Chico Rodrigues has not yet officially communicated to the bloc the desire to leave.

Privately, parliamentarians said that the presence of Rodrigues on the commission caused embarrassment among peers for fear of giving “bad name” to the commission, which has been working since the beginning of the pandemic.

According to the commission’s records, the senator attended seven of the 34 public hearings held so far. 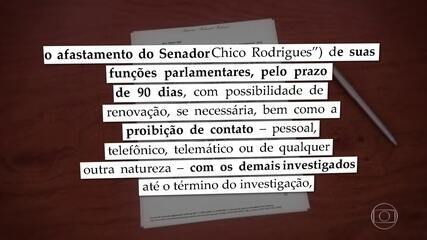 The Sustainability and Citizenship Network filed a representation on Friday to investigate the senator’s conduct on the Ethics Council.

Chico Rodrigues is also part of this committee, as a full member.

In this case, however, the Senate system still bears his name among the members of the collegiate.

Asked if the senator will also request the termination of the ethics council, Chico Rodrigues’ publicist said he did not have this information.

For Rede e Cidadania, Chico Rodrigues violated an article of the Constitution, reinforced by the Senate Code of Ethics, which says that it is “incompatible” with the mandate of a parliamentarian to receive “undue advantages”. The captions classify that the punishment must be the loss of the mandate.

The Ethics Council is stalled, as are most Congressional committees, due to the pandemic.

The council consists of 15 sitting senators plus 15 alternates. The punishments that can be applied are a warning; censorship; temporary and permanent loss of mandate.

If the collegiate vote for the loss of a senator’s mandate, that request still needs to pass through the plenary. Cassation is only allowed if at least 41 parliamentarians vote in favor. Voting in plenary is secret.

While not functioning regularly, committees can deliberate. Next week, for example, the Senate will make a concerted effort, with face-to-face voting by the collegiate and the main plenary, to choose authorities.

Covid-19. There are 72 counties with a “very high” level of contagion (see which ones)

Annita does not reduce symptoms of Covid-19, shows government study

Nitazoxanide does not reduce symptoms of Covid-19, only viral load, says study

Lakers are unaware of the Nuggets and win game 1 of...

Costa removes President of the Court of Auditors with immediate effect....

Religious commerce in Aparecida suffers without tourists; only 13 thousand...

‘The voice’ returns today with the return of Carlinhos Brown, who...

Moving average of deaths by Covid in Brazil is below 500...