It seems like a lie but the truth is that the construction of the new Tesla factory in Berlin was stopped because Elon Musk’s company forgot to pay the water bill.

According to the information, the electric car brand had to temporarily halt construction work on the new Gigafactory Berlin due to the water cut.

GigaBerlin stopped because Tesla did not pay the water bill

The unusual happened to the electric car factory in Germany. Apparently, the works of Gigafactory Berlin, also called GigaBerlin, were temporarily stopped and prevented from continuing because Tesla did not pay the water bill.

Thus, Elon Musk's company interrupted the construction of this mega factory because the water was cut off.

This is news that is being reported by several channels of the specialty, such as Heise:

Tesla is temporarily unable to continue building its factory in Grünheide, near Berlin. The Strausberg-Erkner water association cut the water because Tesla did not pay the money, the association's spokeswoman Sandra Ponesky said on Thursday in Strausberg. 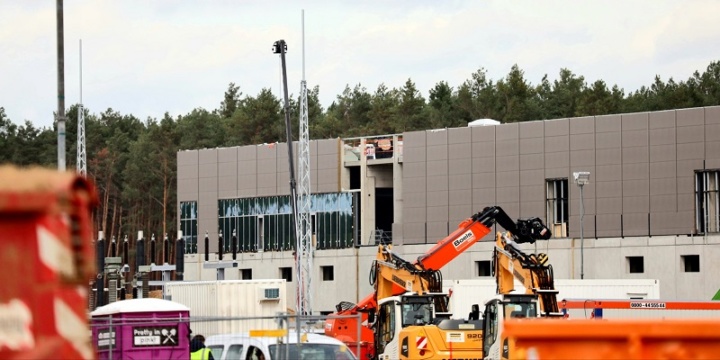 According to the information, the water company said it had already sent several notices to Tesla. However, the tram brand never responded to those contacts. According to a supplier's spokesman, Tesla would not be treated differently in such a situation.

#GigaBerlin
The Strausberg-Erkner water board (WSE) turned off the water at the construction site of the Tesla Gigafactory in Grünheide near Berlin on Thursday (15 October). This was announced by WSE upon request.

According to Heise, Tesla Manufacturing Brandenburg SE recently signed a contract for the supply of water to GigaBerlin. But it is a supply of water and sewage for the first phase of the project. Currently, the manufacturer is obtaining water through a temporary connection via vertical pipes.

The water cut happened at a time when Gigafactory Berlin is in full swing. Elon Musk's company wants to start making cars in Grünheide starting next summer. In a first phase, it is planned to manufacture 500 thousand cars per year and to hire about 12 thousand employees.

Landing of KLM’s latest Boeing 747 is shown live, see how to watch

“All the big banks are having a meeting on how to integrate Bitcoin”, says former Facebook director

Last KLM passenger Jumbo B747 flight is in the air, follow

Work at home requires infrastructure; see your rights in the internet contract

Bolsonaro’s “flyer” is at Lava Jato

Moderna vaccine won’t be ready before US elections | Vaccine

What factors are expected to impact the corn market next week?...

Santos has no new cases of covid-19 before facing Olimpia

Palmeiras suffers with missing Fla and is the 1 to 1...

Covid-19. False tests for sale on the Mozambican border with...