The health posts in the city of São Paulo spent Saturday (17) practically empty, despite the “D Day” of the polio and multivaccination immunization campaign for children and adolescents up to 14 years old, promoted by the State Department of Health this Saturday (17).

Second to pasta, 134,000 children aged 0 to 5 years were vaccinated against polio in the state this Saturday. For other vaccines, 171 thousand children and adolescents, between 5 and 14 years old, were immunized.

Vaccination took place at 3,800 health posts in the state of São Paulo, which were open from 8 am to 5 pm. In the capital alone, there were about 600 vaccination posts.

At the Basic Health Unit of the Republic, in downtown São Paulo, the movement was weak this morning.

“We expected a much bigger movement, today is a cold day in São Paulo, so the movement starts to increase in the middle of the day. We hope that everyone who is in this age group will get vaccinated”, said Adriana, employee of the local.

The movement in another health post in Pinheiros, in the West Zone of São Paulo was also small. In four hours, only 20 children and adolescents had been immunized at the clinic.

At UBS Zumbi dos Palmares, in Jardim São Luiz, in the South Zone, the scene was repeated. By the beginning of the afternoon, only 16 visits had taken place.

See the list of vaccines and age groups foreseen for receiving immunization doses.

D-day of the vaccination campaign: almost 4 thousand Health Units in SP are working

This year, a new vaccine, already included in the campaign, also joined the SUS: Meningo ACWY, which protects against meningitis and generalized infections, caused by the meningococcus bacteria types A, C, W and Y.

“D-Day” is part of the campaign that started on October 2 and runs until the 30th. The goal is to achieve vaccination coverage for 95% of children against polio, that is, at least 2.1 million. Revaccination contributes to reducing the risk of reintroducing the virus in Brazil.

Since the beginning of the campaign, 133,300 doses of the polio vaccine have been applied to children in the state, accounting for only 6.1% coverage of the target audience.

In the city of São Paulo, the rate of vaccination against polio is even lower, at 5%.

For Adriana Peris Câmara, coordinator of the municipal immunization program of the São Paulo City Hall, the coronavirus pandemic keeps people away from health facilities and makes vaccination even more difficult. However, she recalls that all sanitary measures are being adopted.

“Polio coverage is well below average, routine coverage is already low and campaign coverage is also well below. We aim to reach 95% of the target audience and so far in São Paulo we have 5% of vaccinated children. The pandemic reflects a little because parents and guardians are afraid to take their children for a vaccine right now ” 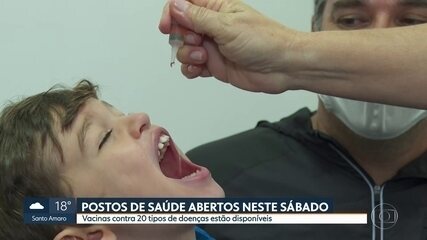 D-day vaccines for immunization of children and adolescents

VIDEOS: news about the vaccine against Covid

World Stroke Day. Know the 3 ‘F’ and recognize the main cause of death

Vaccination against polio is below expectations in Curitiba

Covid-19. Germany may be one of the first countries in Europe to start mass vaccination – Executive Digest

Nutrition in Practice: Food in the prevention of breast cancer

World Psoriasis Day: about 3% of the population has the disease in Brazil

Vaccination Campaign against Polio and Multivaccination are extended until November 21

Covid-19: looking for a vaccine | Paths of Reporting | TV Brazil

Not even a car is able to crush this beetle

Cash back to pay emergency aid and FGTS on Tuesday (13)

Chinese doctor who changed color due to Covid-19 has recovered skin...