Google Pixel 5 was announced at the end of September as the search giant’s new flagship. Unlike its predecessors, however, the Pixel 5 abandons the specifications of top-of-the-line smartphones in favor of more basic construction and modest hardware.

As usual, the big highlight of the new device is its set of cameras, which usually show great results despite the old sensors thanks to Google’s aggressive software approach.

However, it seems that the age of the sensors is starting to affect the device’s camera performance, as pointed out by the tests carried out by the DxOMark engineers with the Pixel 5. According to the experts, the Google smartphone delivers solid results, reaching 120 points in total, but ends up standing out of the Top 10 for falling behind recently tested rivals such as the Huawei P40 Pro and Xiaomi Mi 10 Ultra. 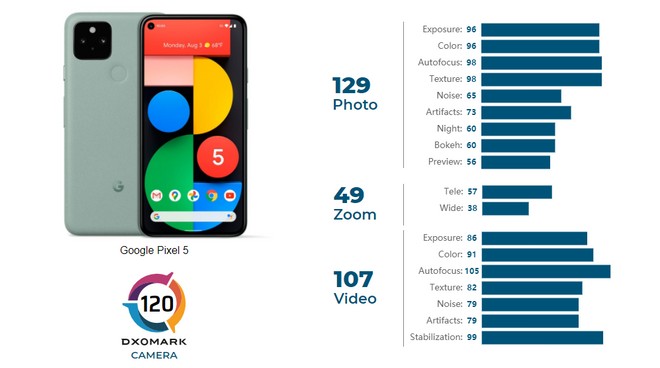 In photos, the Pixel 5 presents its best result with 129 points, but it still ranks below the competitors in this regard. The Google device has good levels of contrast and exposure, good color fidelity, excellent work in auto focus, great depth of field, preservation of details even in distant objects, good management of unwanted artifacts, great results in bokeh, solid results in night scenes and good fidelity in the preview of a photo.

However, DxOMark engineers indicate the almost constant presence of visible noise in virtually all images as the biggest weakness of the Pixel 5. The HDR of the device is also not impressive, although it has improved compared to its predecessor, and there is great presence of chromatic aberrations in external photos. There is still room for improvement in very dark environments, where rivals show significantly superior results.

In zoom, a new category of tests, the Pixel 5 presents the worst results. The device scores 49 points, suffering from the lack of a dedicated telephoto lens. Despite being superior to competitors with similar hardware, such as the iPhone 11, the Pixel 5 is far behind the best phones in this regard, such as the Mi 10 Ultra.

The Google smartphone does better in ultrawide, with good exposure and colors, but continues to show visible noise, with less detail and loss of sharpness at the edges. Its biggest weakness is the reduced viewing angle of 16.5mm, which is unable to fit the same number of objects as its rivals.

Finally, in video, the Pixel 5 scores 107 points, showing good results in general, with, even though the device is not able to maintain quality in low light environments. The smartphone offers its best stabilization profile in 4K recordings at 30 FPS, and ends up taking the top of the ranking in autofocus, with excellent results in any light condition. There is good exposure control, although below the competition, and its dynamic range is limited.

In conclusion, DxOMark testifies that the intermediate route followed by Google may not have impacted the experience of using the Pixel 5, but it definitely affected its performance on camera. With hardware limitations, the smartphone is behind the best devices in several aspects, such as zoom, bokeh, noise and textures, where the presence of extra lenses would help. Still, the Pixel 5 does a good job, mainly thanks to its software, and proves competent considering its price.

Google Pixel 5 is not yet available in Brazilian stores. To be notified when he arrives.

Phil Spencer praises the capabilities of the PS5 DualSense controller

IPhone 12 and iPhone 12 Pro: find out how much it costs to build each unit

350,000 Spotify passwords needed to be reset after leaking on the web

iPhone 12 Pro looks good in selfie camera test, but does not lead ranking

MPF questions CBV for not punishing players who apologized to Bolsonaro...

Woman in her 70s killed in Drammen

Study confirms that animals and humans can transmit SARS-CoV-2 to each...

Put a spear in Africa? China-US Cold War May Have...