THE Toyota Yaris is one of the keystones of Toyota’s presence in Europe, where it is manufactured (in France) and where it became the best-selling model in the Japanese brand’s range (224,000 units in 2019, with a 7.6% share of the B segment ).

Right from the launch of the original generation in 1999, it started to gain prominence by winning the important Car of the Year trophy in this continent (for the first time for Toyota), in the second generation it managed to be the first car of this class to win the five stars in the safety tests of Euro NCAP and in the third it was also a pioneer in making a hybrid version available in segment B, this in 2012.

And successfully to the point that in many markets, the hybrid version is now the only one available (in others, like the Portuguese, there is also a 1.0 of 72 hp and a 1.5 of 122 hp, even though the hybrid represented more than half of the registrations in our country last year) and have led competing brands to follow suit, specifically the new Honda Jazz and Renault Clio, both with hybrid versions.

More sporty, in being and in opinion

For the Yaris IV the Japanese wanted to apply the same formula that is being used across all Toyota for sale in Europe. A more striking design (with many new creases in the body, an enlarged grille, more aggressive line optics), a more efficient and even sporty behavior, and optimization of the propulsion system.

Here’s how they wanted to do it. First of all, it is important to inform that this is a brand new car. The platform is called GA-B and is a derivation of GA-C and GA-K used, respectively, in the models Corolla / Prius and Camry / RAV4, having as main innovation an especially low center of gravity, which leaves the car more “planted” to the road and involves the driver more with his main mission.

The proportions play in the same direction, with the Yaris Hybrid gaining 5 cm in width and losing 4 cm in height, creating conditions – just here – for reinforcing stability in curve (the length had a residual variation, shrinking 0.5 cm ). Also important is the decision to reach the axles at the ends of the car so that the wheelbase could be extended by 5 cm, with the resulting benefits in terms of interior space.

Then, jumping to the inside, these structural changes have repercussions in the cabin. The front seats have been recessed (6 cm) and lowered (they are 2.1 cm closer to the road, while the center of gravity has dropped 1.2 cm). The front pillar was also positioned further back, which, along with the lowering of the instrumentation, improved the driver’s visibility, says Toyota. And it’s true… to the front, because the fact that the glazed surface has decreased and the rear coupe shapes have worsened the visibility to the rear, especially at the angle of ¾.

The driver also benefits from a more sporty steering wheel (lower diameter rim) and in a more vertical position (6º), in addition to the more equipped versions having a head-up display (10 ”projection area and color). Unique item in this segment because the projection of information is made on the windshield (as in high segment models) and not on a blade above the instrumentation, as it happens in some more affordable cars.

The dashboard has changed, looking more “serious” and having a larger infotainment screen (standard with 7 ”but it could be the 8” of the Corolla and RAV4). This has the notion of not being as well integrated into the dashboard as the predecessor and also of being a little slow to use and containing somewhat dated graphics, as is often the case with Japanese cars (I admit that there may be a cultural component in this cross-sectional appreciation Europeans).

There are many hard-touch plastics, even though the smooth surfaces have increased, but the assembly quality is quite convincing.

The space has increased in width at the front (1 cm) and at the rear (3 cm), but remains less than that of several rivals (Volkswagen Polo, SEAT Ibiza, Hyundai i20, etc.) and the leg length in the second row also gained marginally (plus 1 cm), surpassing what exists in competitors such as the Renault Clio, Opel Corsa or Nissan Micra. Less positive is the fact that access to the rear seats has worsened, because the rear doors are smaller and the seats in the second row are lower (5 cm), requiring greater effort to sit and stand. 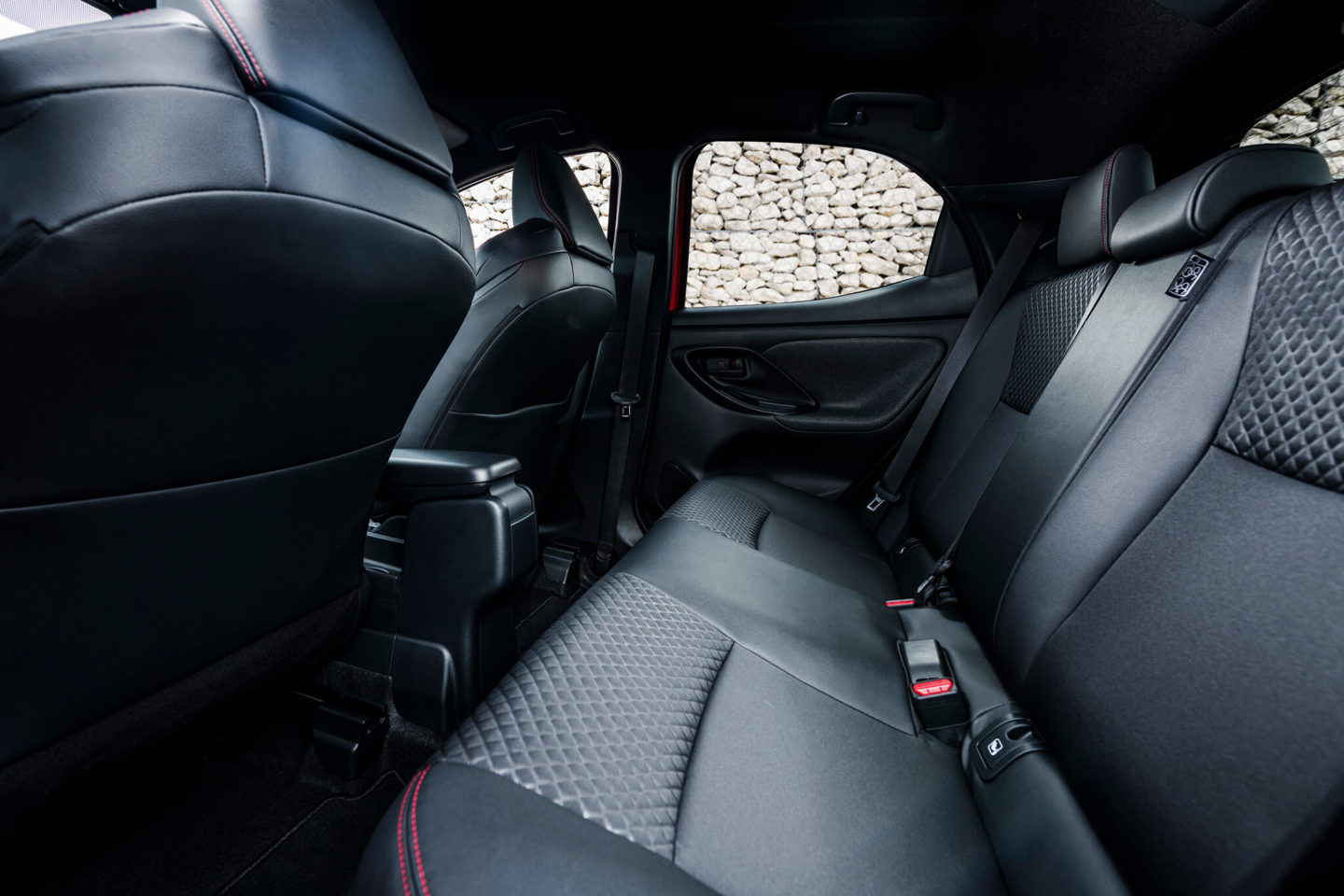 The luggage compartment retains the 286 l capacity of the previous generation, which means that it remains one of the smallest in this class (at least the shapes are regular and there is a tray on the floor that allows its use to be made more flexible).

YOU MUST SEE: We already know how much the Toyota GR Yaris costs in Portugal

The evolution in the hybrid system (not plug-in, that is, without external recharge and with a short electrical autonomy) was great. Not so much in the 1.5 engine of 3 cylinders and 90 hp (previously 75 hp) combined with the electric motor of 80 hp (before it was 60), with the maximum performance of the system being 116 hp (100 hp in the predecessor). Especially because the gasoline engine continues to work on the Atkinson cycle, in which the intake valves stay open longer and delay compression, with advantages in reducing consumption and inconveniences in power delivery.

But more important was the replacement of the nickel metal hydride battery with a lithium ion battery (Toyota was slow to adhere to the new and more advanced chemistry, but is finally doing so) which weighs less than 12 kg, is much smaller (48 instead of 120 cells) and has more voltage / energy density (from 144 V to 177 V). Fundamental is the fact that the new battery is able to absorb and release energy much faster and this is what allows an increase in power of about 50%.

Thus it became possible to increase the time that the Toyota Yaris Hybrid rolls only electrically, the maximum electric speed (from 50 km / h to 130 km / h) and to reduce consumption (by 20% despite the increase in power of 16%). A second electric motor is used to start the gasoline engine and to charge the battery in recovery situations.

SEE ALSO: We have already driven the new Honda Jazz and Honda Crosstar Hybrid. Is this the “king of space”?

Much more connected to the road

The first conclusion behind the wheel of the new Toyota Yaris is very close to the one I had when driving the new Corolla and RAV4: the car is much more connected to the road and the driver in all its main interfaces.

The suspension (independent at the front, semi-rigid axle at the rear) with wider tracks (5.7 cm) is much better against the tendencies for the body to adorn in curves, the lower center of gravity too and the faster and more precise steering competes for the same purpose.

As usual, only the planetary gear transmission (e-CVT) makes you a poor relative by failing to exploit the dynamic potential of the propulsion system. It is true that it is much better, the lack of parallelism between the speed / sound of the gasoline engine and the acceleration of the car is no longer frightening, even though the sensation of elastic band (or that we are stepping on the clutch while accelerating) does not disappeared completely. The Japanese have been insisting on this type of ATM for 23 years and there is no point in going against it, no matter how hard you try…

The increase in torsional rigidity of the body (by 37%) also helps Toyota Yaris to swallow corners with another appetite, but I must mention that the combination of 17 ”wheels with Sport suspension adjustment is excessive and even makes it it is too “hard” (I never thought to write that of a Yaris), so it will be preferable to avoid this pairing (even considering that the rear axle springs are softer, also because the axle itself is 80% more rigid) .

The gasoline engine turns on and off very discreetly and on urban routes it is, in fact, possible to run much more than half the time with it “off”, only with electric propulsion.

The performance has improved a lot, with gains of two seconds both for the acceleration from 0 to 100 km / h (down to 9.7 s), or for the resumption of speed 80-120 km / h, which means that even though it is not no GTI, the new Toyota Yaris Hybrid “does very well”, especially on city and national roads and would do much better with another gearbox …

There is no point in continuing to hit the blind man, but we get an idea of ​​what gets lost with this box when we see that the Yaris 1.5 only gasoline is slower 1.2 s at 0 to 100 km / h than with the box six-speed manual …

The most smiling part has, of course, to do with consumption, with an official average of 3.7 l / 100 km and that will effortlessly walk below 4.5 l / 100 km, even leaving the city.

Finally, we learn what the Toyota Yaris Hybrid is in terms of safety equipment and driving assistance: lane maintenance with steering assistance, crossing assistance, central front airbag (so that driver and passenger do not collide afterwards impact of the car) and autonomous pre-collision emergency braking, now capable of detecting pedestrians during the day and night and cyclists during the day.

Items that contributed to the new Toyota Yaris becoming the first to achieve five stars in the revised and updated, and most demanding Euro NCAP tests.

SEE ALSO: This is the Suzuki Swace and the fact that it looks like a Toyota Corolla is no coincidence

Toyota Yaris. When does it arrive and how much does it cost?

Unemployment in Brazil reaches a record of 14.4% in the quarter ended in August, says IBGE | economy

BCP shoots more than 5% after results. It is the biggest gain in 4 months – Bolsa

Okay! Digital social savings Free cash will have a limit of up to R $ 5,000

Near halving for Petoro so far this year – E24

3% of the more than 800 satellites ever launched are defective

Portugal is in the TOP 5 of the countries that sell...

At the request of Ney Franco, Cruzeiro foresees the hiring of...

Facebook banned everything related to QAnon on all platforms

Influencer says he was barred in Gusttavo’s live because of Andressa’s...