Tic-tac, tic-tac, tic-tac … the clock does not stop and with every second that passes, the time for the launch of Playstation 5 is approaching.

And as the date approaches, Sony Playstation has been revealing numerous news about the console (see here, here or here). The most recent was about User Experience.

Sony Playstation recently revealed a new video about Playstation 5. This time, the focus of the video is the console user interface, showing a little how simple the process of switching between games and sharing experiences on the new console is.

This video is initially presented by Hideaki Nishino, responsible (among other areas) for the design of the User Experience of the console, which then gives the floor to Sid Shuman, Senior Director, Sony Content Communications.

In the video, Sid starts the session, as Playstation 5 was in Rest mode and, even though he had to Log in to the Playstation Network, the console knew that he had paused it in a session of the game SackBoy: A Big Adventure (as you can see in the video , the game is still in the background in the console environment).

Upon entering the system, the system is immediately placed in the Playstation 5 Control Center, and with a simple click, we could resume the game without delay.

The Control Center can be accessed with a touch of the Playstation button and will be the central point of the console, as it allows access to virtually all existing systems (see who is online, check the connected controllers, friends lists, ...). 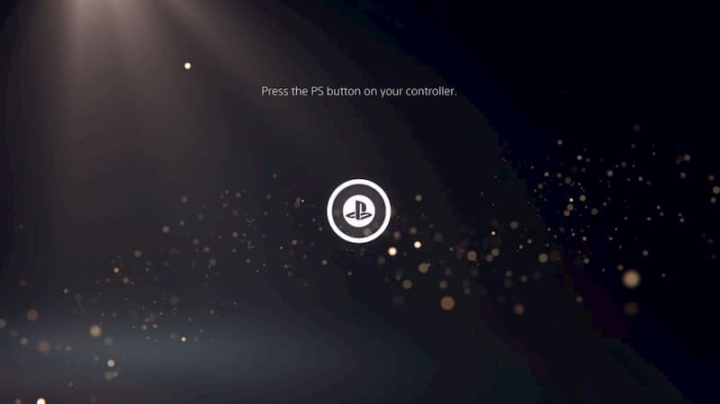 One of the fundamental points of the Playstation 5 operation will be precisely these Cards (in Portuguese Cards), which are interfaces of quick interaction with games (and not only) in a varied and clear way. Here are some of the examples of Cards Sid showed:

For example, Sid showed us on his Playstation 5, the Official News Card, which allows access to Stories launched since our last Log Out (in this case he went into rest mode).

Another Card identified was that of Media elements recently added by Sid. It seems that before leaving the session he had taken a Screenshot (through the Create Button of the DualSense Controller) and here is the indication of that. 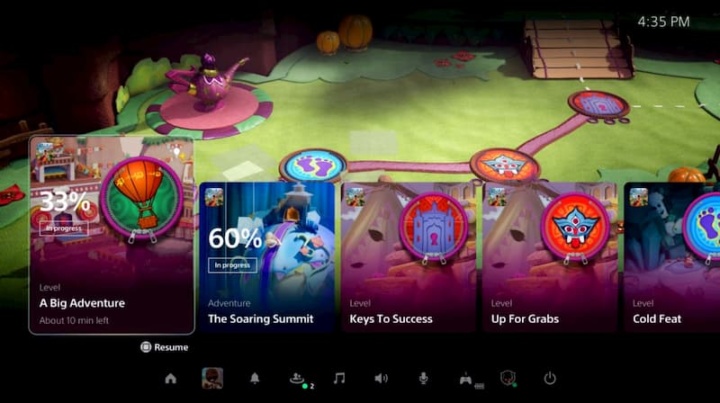 Sid identified this option, or Card, as one of the most powerful on the console: Activities. This tab is responsible for, in the words of Sid Shuman, “remove barriers to gameplay“. For example, with a tap on the Playstation Button, Sid went back to playing SackBoy.

When he clicked on the Playstation Button again, Sid returned to the Control Center and there he is shown a set of activities related to the game that he can perform (some suggested by the system, which he himself was unaware of). By clicking on each of these activities, he can quickly learn more about his goals and requirements. It even makes a forecast of the time it takes to complete.

Depending on the game, there are Activities that allow you to jump immediately to the place of the game where it takes place. With this, Playstation 5 acquires a unique ability to focus its attention on games and to allow players even more immersion.

On the other hand, some Activities provide what Sony calls Official Game Help, which is, as the name implies, a set of aids and tips to players, without having to go to the Web or elsewhere looking for them. However, this system will be a benefit available only to Playstation Plus users and for some PS5 games. Interesting the fact that we can watch the tips videos while playing, which means that we can follow the directions in real time. 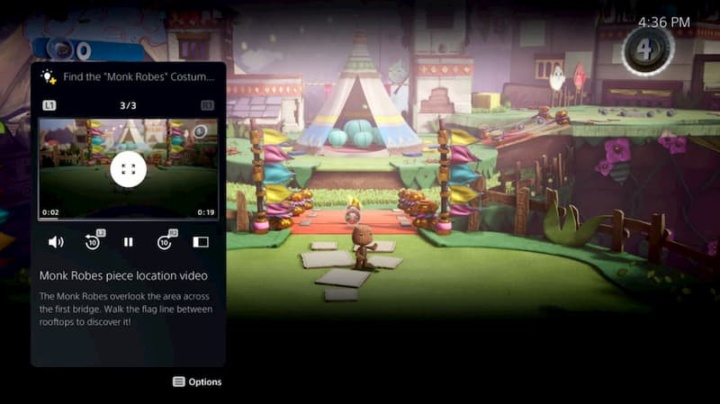 Interactions with other players during the game

While playing SackBoy, Sid also demonstrated how to interact with friends online, while playing, via Interactive Notification.

Since the DualSense has a built-in microphone, you can speak immediately. 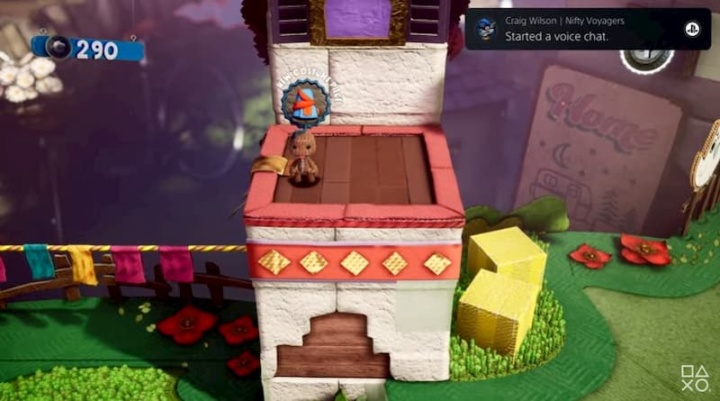 Sid also revealed access to the Parties to which we belong and which, as he says, are now persistent groups that can be accessed at any time.

The example he reveals shows us a friend of his sharing his screen on his Playstation 5 and, while playing his game, Sid sees the friend's sharing.

It is something very interesting that allows us to be playing a certain title and watching the game of another friend of ours, in another game.

Sid also covered the online game on Playstation 5. In the example he gave, he shows us a friend who had already started playing Destruction AllStars and Sid decided to enter the game, through the respective Card in the Control Center. 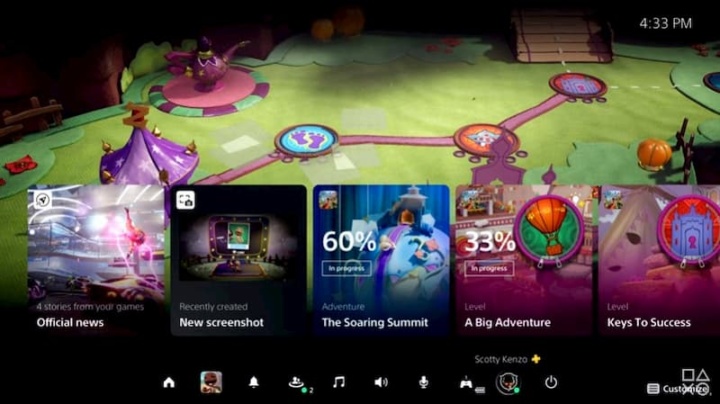 After entering Destruction AllStars, Sid decided to just take a picture, which can be done by pressing the Create Button on DualSense.

Sid also said that when taking a photo (or video), it is taken with a 4K resolution and can be rejected right away.

This is the screen that players will see when they restart the console, or when they want to change the game.

On Playstation 5, games are presented in 4K thumbnails, with card format as well, which allow quick and consolidated access to the main features and hubs of each game. Each card will give you access to videos, images, Stories, DLCs and even Activities for each game (which we can jump to immediately as we saw above).

PS4 games will also be entitled to this form of presentation and quick shortcuts, apart from the Activities part, of course. 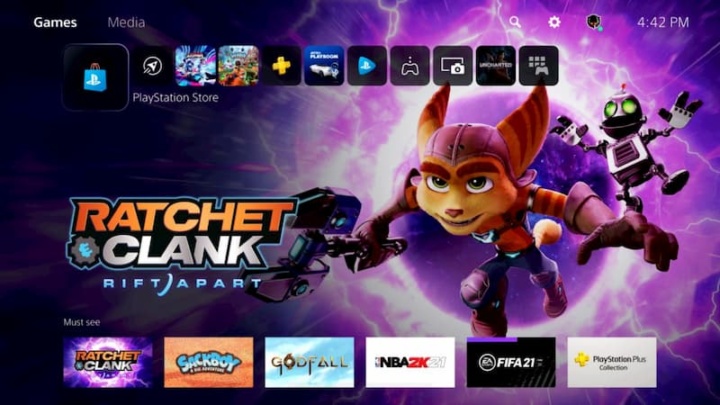 An option available on the Home Screen is Explore (Explore), which, as the name implies, allows you to explore all the games we have, which we follow. It will be a feature that, in the times immediately following the launch of Playstation 5, will only be available in the United States.

Another novelty present is the fact that the Playstation Store is no longer an App and becomes integrated in the system, thus being faster to access and use.

“Navigating the Playstation 5 interface, changing games and participating in online games will happen quickly, as we have recreated the console's stack software to provide players with a true next-generation experience”Said Hideaki. And he added: “We think that the less time players spend interacting with the system, the more time they will have to enjoy their games”.

Huawei claims to have the most powerful mobile chip in the world, but until when?

Half of the Sun-like stars may have habitable planets

iPhone 12: Apple embraces the future without forgetting the past | Hands-on video

Cobra Kai is renewed for fourth season on Netflix

After testing positive for Covid-19, Luana Piovani is devastated by her...

Snow fell in New York – and the best climate photographer...

Pernambuco records the lowest number of confirmed cases of Covid-19 in...

Corinthians suffers the biggest rout in their stadium since 2014 –...

Monique Evans says she became ‘asexual’ after breaking up: ‘I retired’...