Earlier this week, Duchess of Cambridge Kate Middleton announced the winners of the prestigious 2020 Wildlife Photographer of the Year contest. It was the 56th time that the London Museum of Natural History held the annual contest, which shows the best photographs of nature and wildlife in the world. The winners of the past few years have all been impressive, and this year’s winners are no different.

The winners were selected from more than 49,000 entries from around the world, which means that we are really seeing the best here. Check out some of the main winners this year.

The photo entitled “The Embrace” (“O Abraço”, in free translation) was the winner of this year’s Grand Title. It shows an Amur (or Siberian) tigress wrapping her forelegs around an ancient Manchurian fir in the far east of Russia, which is the only place where rare species can be found. The photographer, Sergey Goshkov, captured that moment after spending more than 11 months watching his hidden cameras across the region.

The fox that caught the goose 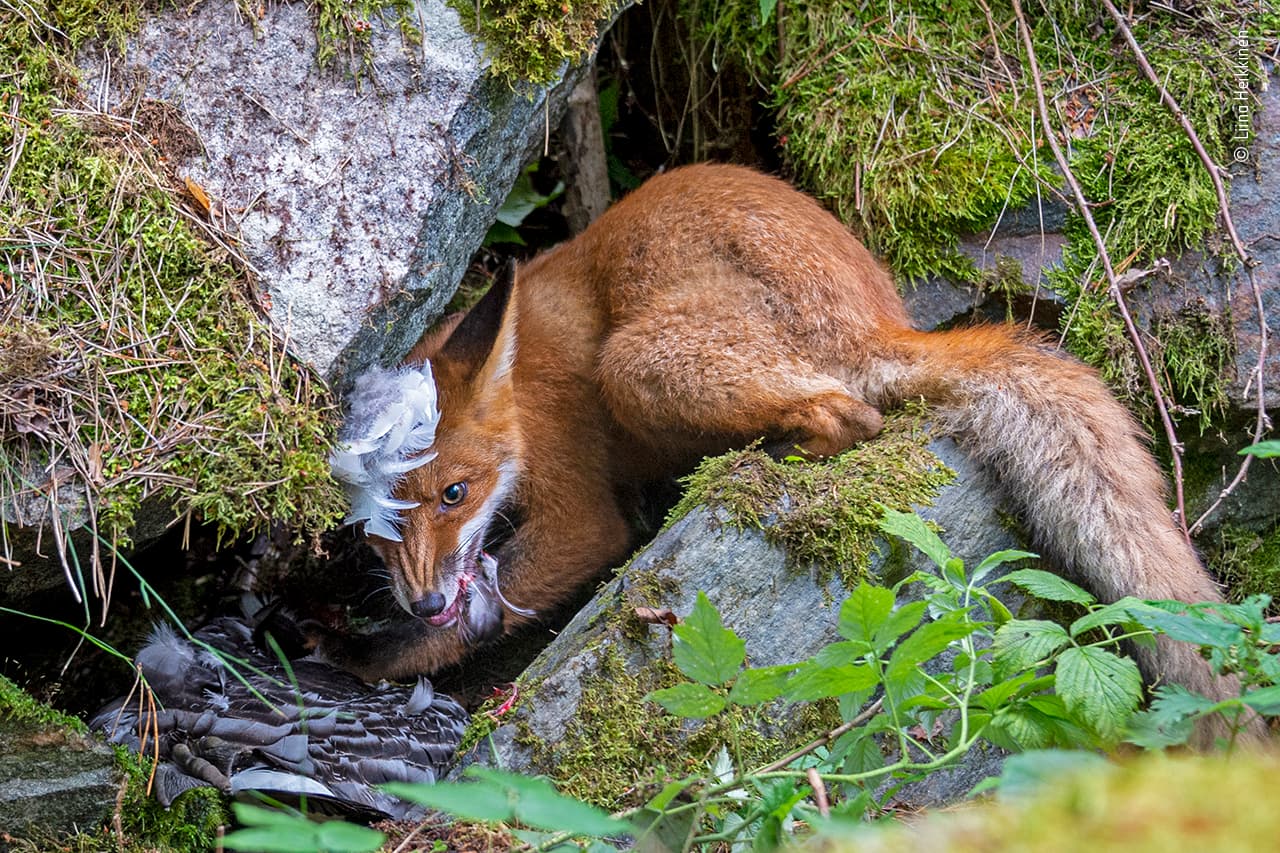 This photo was taken by Liina Heikkinen, and she won the distinction of Great Title Young Wildlife Photographer of the Year. Heikkinen is only 16 years old. Previously, Heikkinen was runner-up in the 2012 Natural History Museum contest in the category for children aged 10 and under, when he was just nine. 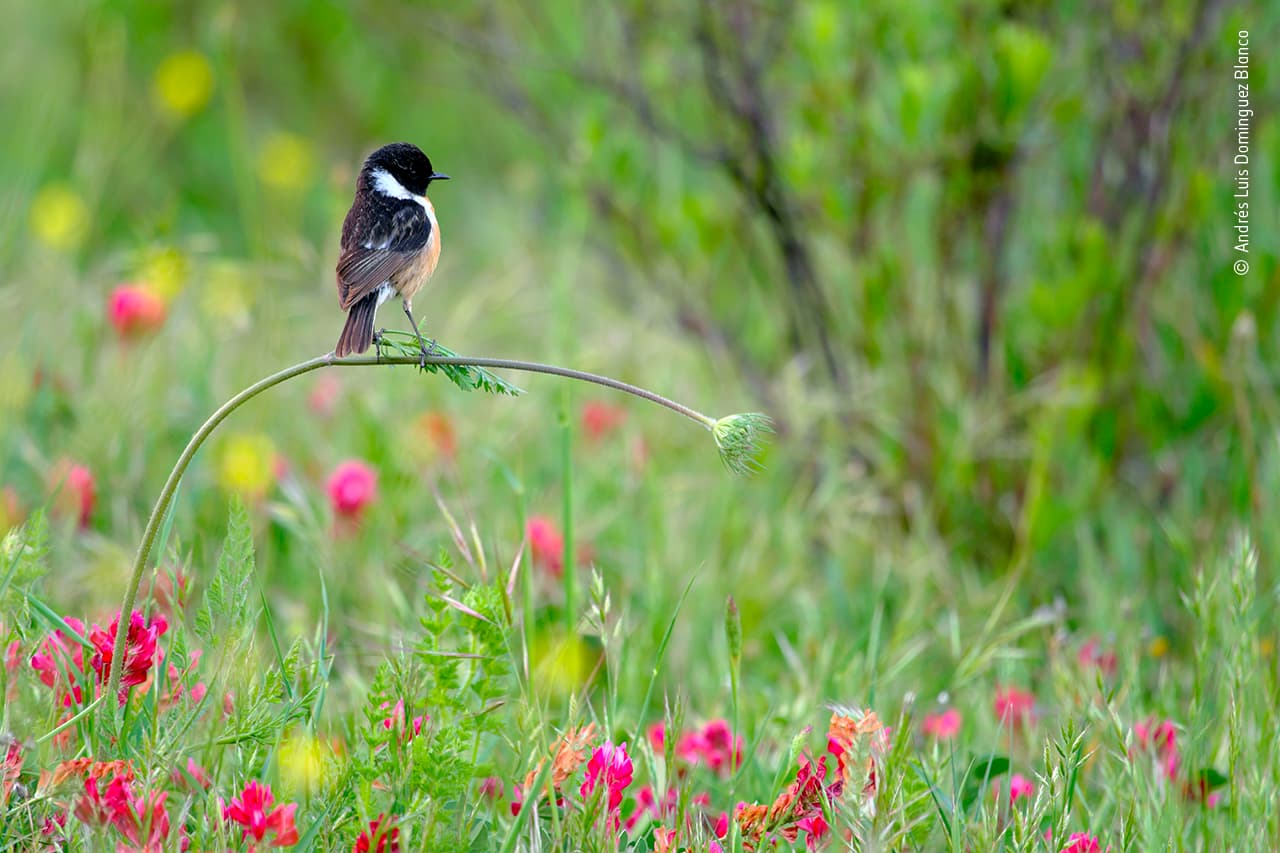 The photo was taken by Andrés Luis Dominguez Blanco, and is the winner this year in the category of young people under 10 years of age. The bird in the image is a common stonechat and is standing between some flowers. The young photographer took this photo in the meadows near his home in Ubrique, Andalusia, Spain. It was already late and the faint sunlight illuminated the bird’s fluff. 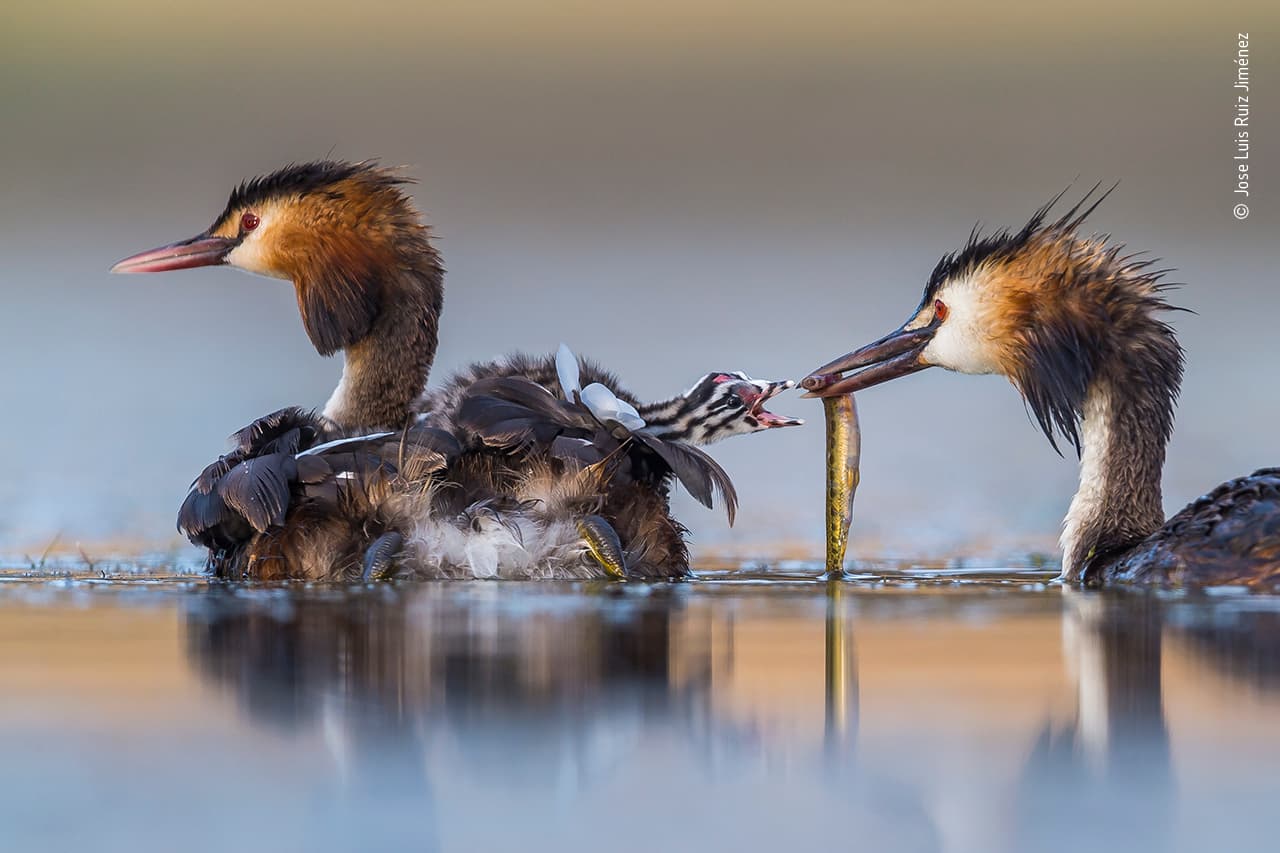 This image was taken by Jose Luis Ruiz Jiménez, and won first place in the Bird Behavior category. It shows a couple of crested grebe feeding their young. The photo was taken during the breeding season of the birds, when they look most impressive. Ruiz Jiménez captured the photo after spending several hours in chest-deep water in a lagoon in western Spain, near the small town of Brozas. He floated his camera on a U-shaped platform under a small camouflaged tent and hid his head under the platform as well.

A Tale of Two Wasps 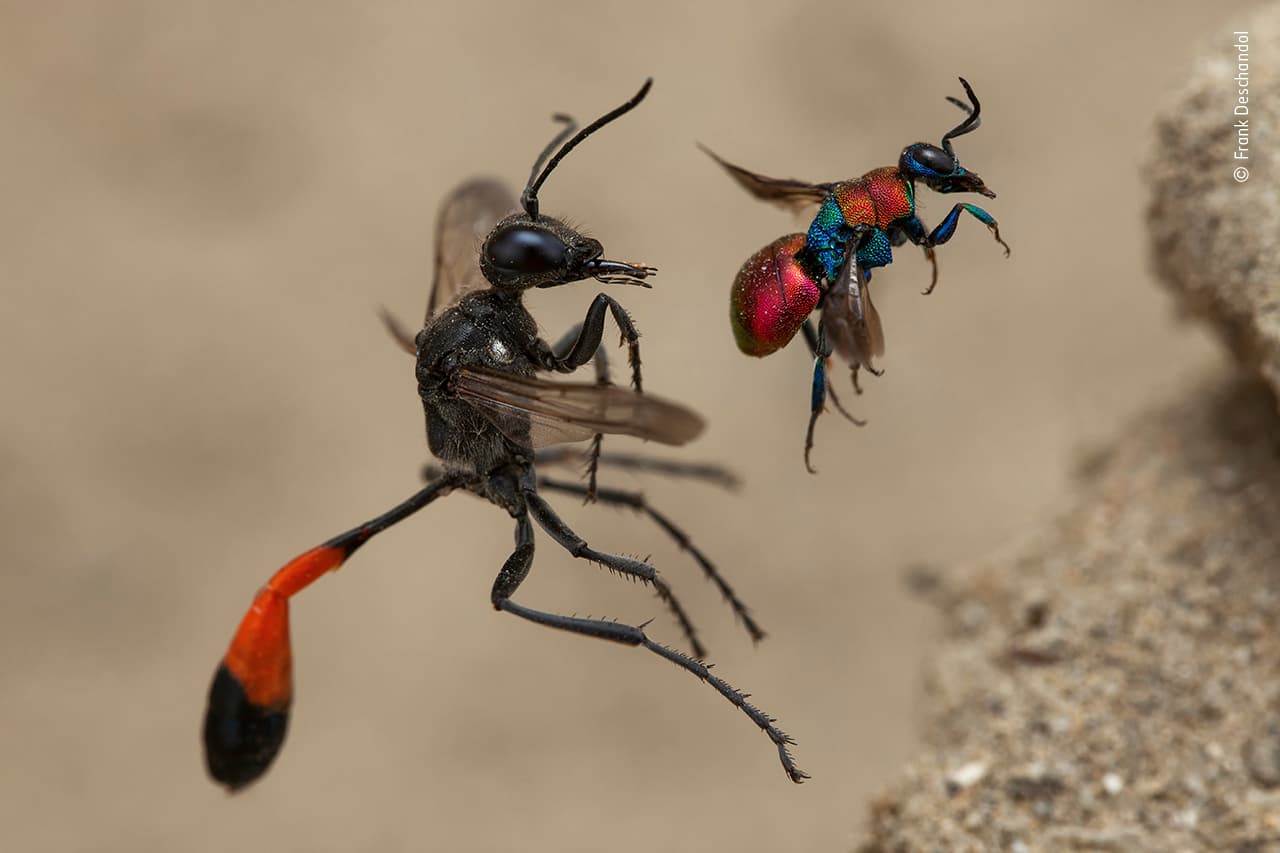 This image earned French photographer Frank Deschandol the top prize in the Invertebrate Behavior category. The wasps in the photo are a savory Ammophila wasp, on the left, and a cuckoo wasp, on the right.

When Mother Says to Run 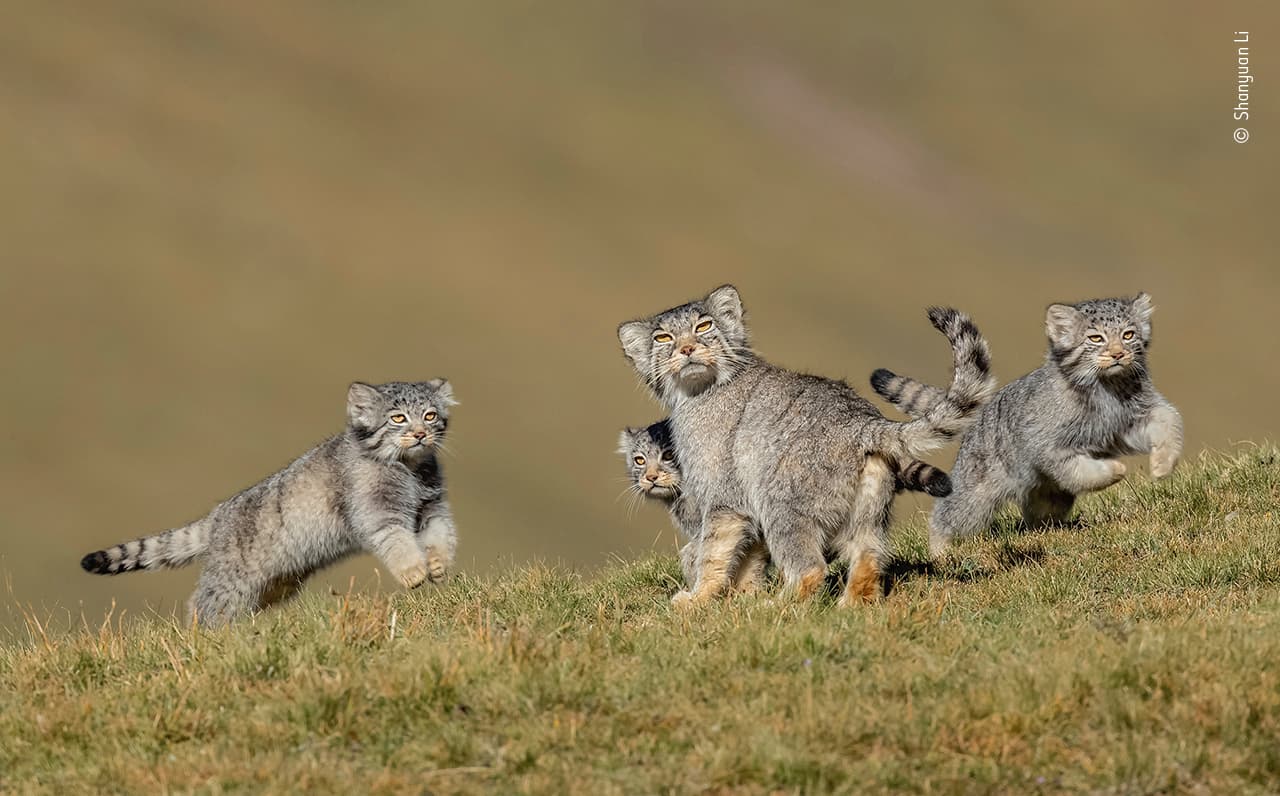 This was the winner in the Mammal Behavior category. The photo taken by Chinese photographer Shanyuan Li offers a rare view of a family of young pallid cats, or manuls, in the steppes of the Qinghai-Tibet plateau in northwest China. Li spent six years working at high altitudes taking pictures of the animals to get it. He tracked a family of kittens for more than 2 kilometers while they searched the steppe for food. He ended up hiding on a hill in front of their den until the kittens came out to play. 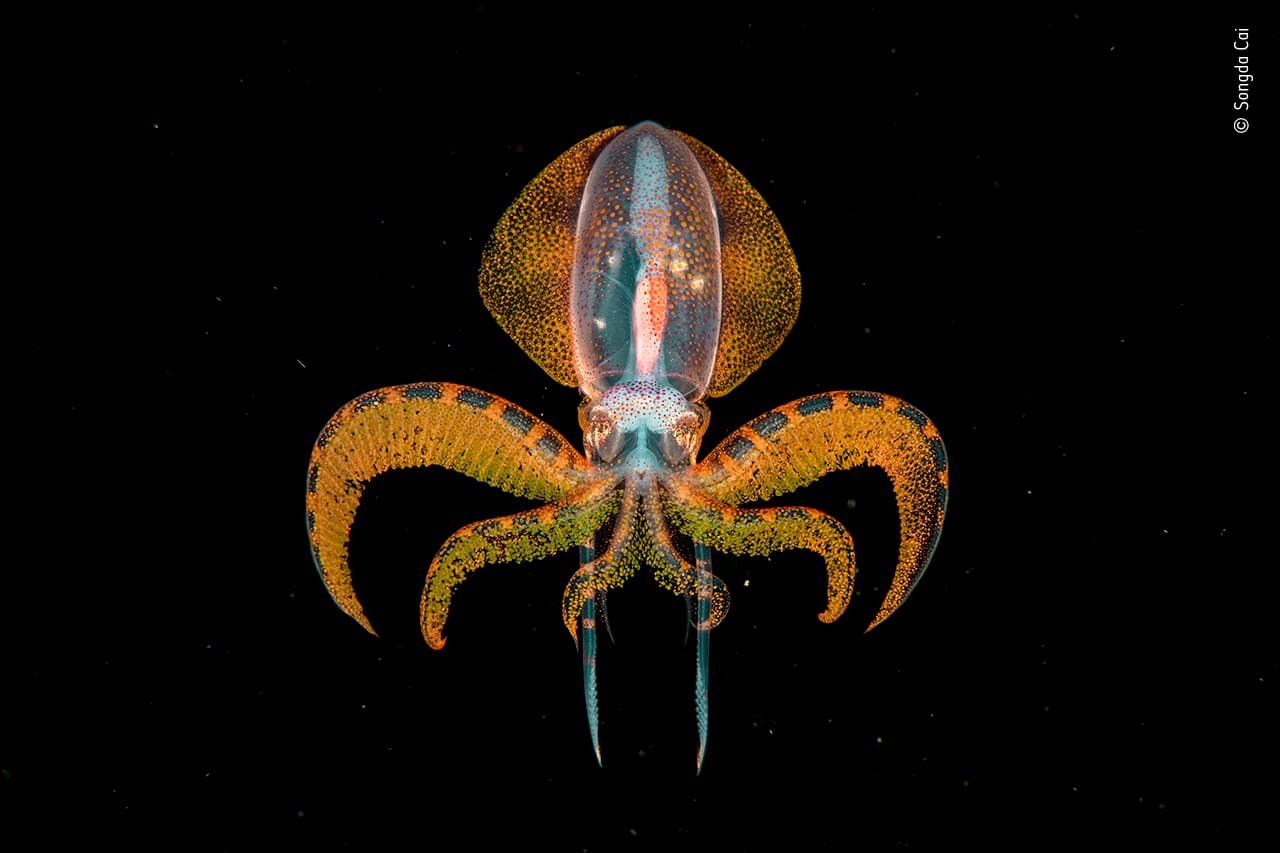 The Underwater category winner is “The Golden Moment” by Songda Cai, from China. The creature in the photo – a squid parallel of the species Thysanoteuthis rhombus – is quite small. It measures between 6 and 7 centimeters in length. Cai took the photo when he was on a night dive in deep water off the coast of Anilao in the Philippines.

The paralarva is an initial stage in the development of the squid between the phases of puppies and sub-adults, and this appeared in the light that the photographer was using to orient himself in the water. This creature will remain transparent in adulthood, like all squids of that species. The bright orange parts are elastic bags of pigment under your skin.

Watching you watching them 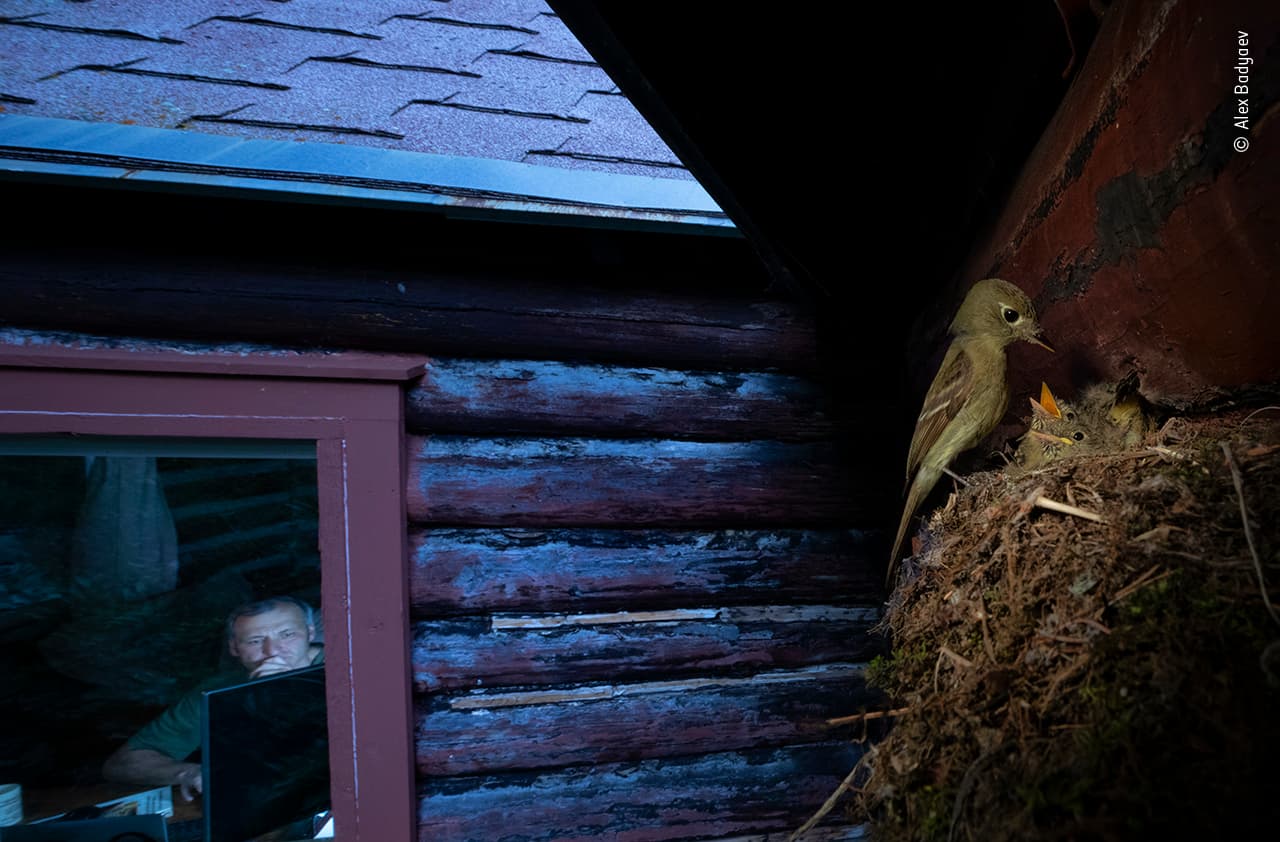 This image taken by Russian-American photographer Alex Badyaev was the winner in the Urban Wildlife category. Badyaev photographed the bird of the species Empidonax occidentalis in Rocky Mountain Front, Montana, where he was watching the birds with a biologist that you can see in the background. The species shown in the image are disappearing across western North America due to climate-induced changes in their habitat. 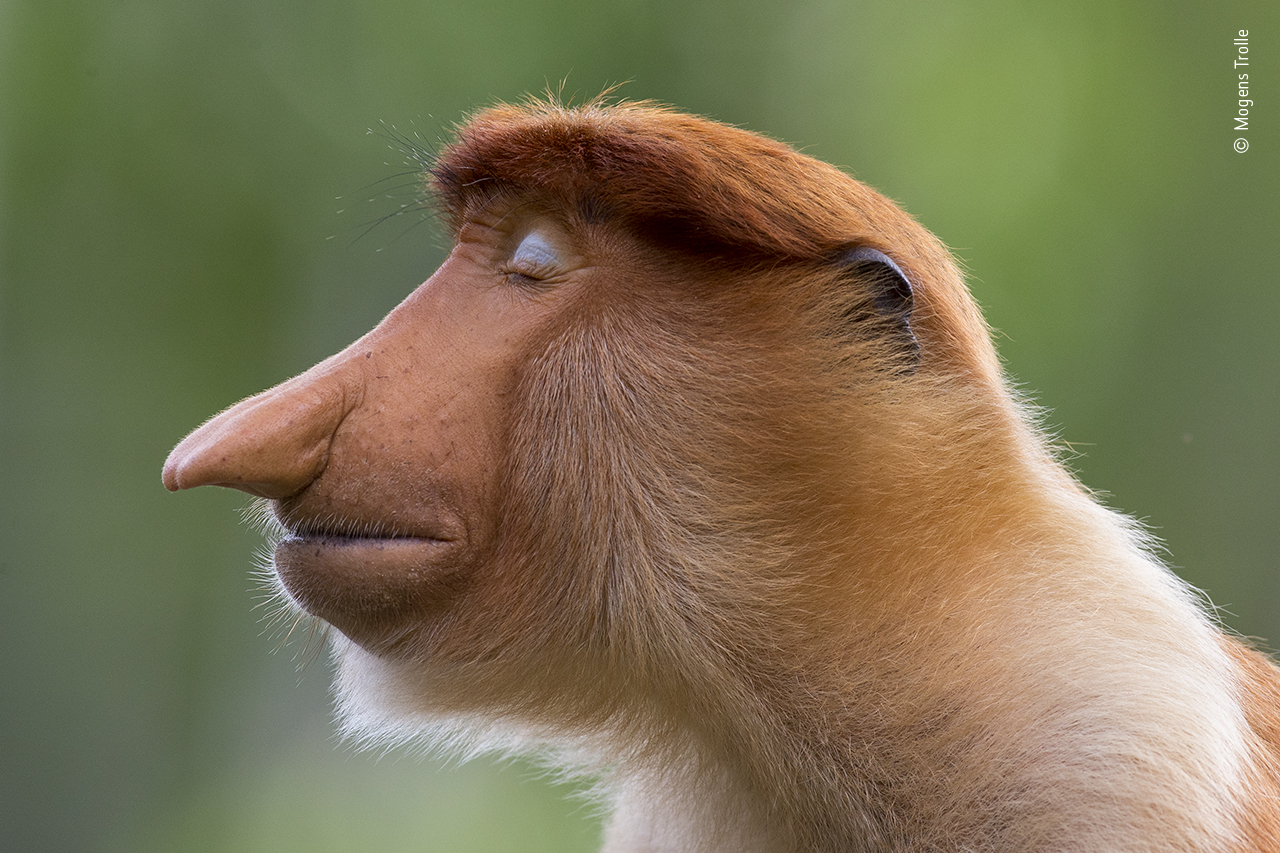 This photo is called “The Pose” and is by the Danish photographer Mogens Trolle. It shows a young male Proboscis monkey at a feeding station at Labuk Bay Proboscis Monkey Sanctuary in Sabah, Borneo. In a statement, Trolle – who has been photographing primates for five years – called him “the most relaxed character”.

Trump can still win against all odds

Azores go to the polls. Voters called to vote in regional legislatures

Fooled older women for their savings

Car hangs between railing and rail of overpass in Brazil

Rain leaves SP in a state of attention for flooding; some regions had hail | Sao Paulo

US Presidential Election, Crown | The election result that can give a bang:

The signs that can form ambitious couples

UC seeks to reduce burnout in medical and dental students