Credits: Marcelo Camargo / ABRAmong the 15 vaccines in the children’s calendar, including the second dose of the Triple Viral, half have not met the goals since 2015

“This is a very important fact, which concerns the Ministry of Health very much and should concern all health professionals so that we can join forces and work to expand these vaccine coverage”, said Francieli Fontana, who assesses that the pandemic of the covid- 19 must have influenced vaccination coverage. “We still do not have a real assessment of the impact of the pandemic on vaccination coverage, but we believe that, yes, we will have losses in relation to vaccination coverage due to this moment”.

Francieli Fontana explained that the drop in vaccine coverage during the pandemic was a phenomenon felt globally. According to the World Health Organization (WHO), 125 vaccination campaigns that were scheduled for the first half of 2020 have been postponed. The problem of interruption of vaccination services has prompted WHO and the United Nations Children’s Fund (Unicef) to warn that 117 million children in 37 countries could stop receiving the measles vaccine, which has also caused outbreaks in several parts the world in recent years, including Brazil. 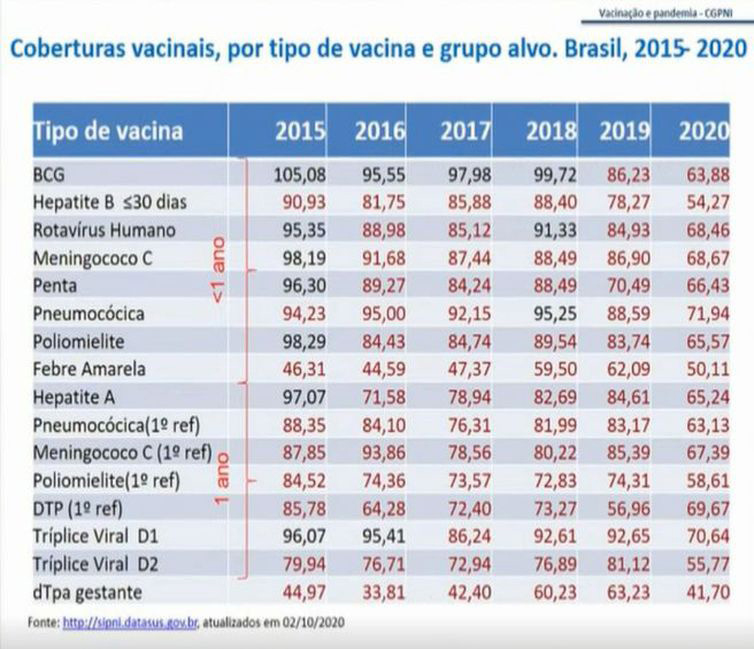 The drop in coverage challenges the National Program for Immunizations of the Unified Health System, considered one of the most extensive and successful in the world. The program had a significant increase in vaccination rates between 1980 and 1995, the year after which rates were stable at high levels, and, in some cases, above 100%. The setback started in 2015, and before the pandemic, factors such as opening hours of health units, the circulation of false information about the safety of vaccines and even the impression that immunopreventable diseases have ceased to exist already weighed.

“If we were successful, it is because we had high vaccination coverage. From the moment we started to have low vaccination coverage, there may be a reintroduction of diseases that have already been eliminated”, warns Francieli Fontana, who cites the example of measles, which arrived to be considered eradicated from Brazil and today has active transmission in four states and cases in 21.

The coordinator of the PNI also highlights the need for engagement and training of health professionals, in order to transmit correct information to the population. “We check a lot of fake news, a lot of fake news, and, often, the health professional, instead of looking for a safe source and empowering himself with knowledge, he multiplies this news. It is important that we search for reliable information , so that we can be safe in guiding the population “.

Among the actions of the Ministry of Health to combat the drop in vaccine coverage is the Movimento Vacina Brasil, which includes initiatives such as expanding the opening hours of vaccination stations and a telephone and Whatsapp channel to deny false news, at number 61 99289 -4640. Three vaccination campaigns are also underway: one against measles, since March, and the campaigns against polio and multivaccination, since 5 October.

Director of the Brazilian Society of Immunizations, the infectologist Guido Levi recalls that observing the vaccination schedule is an obligation of citizens provided for by law since the creation of the National Immunization Program, in the 1970s. “We are seeing social responsibility, not anymore. individual responsibility. It is the individual as a member of society. It is a different situation from their autonomy to treat a glaucoma or a non-contagious disease “, he says, citing studies that attribute a 30-year increase in life expectancy to vaccines over the 20th century.

Although legal instruments such as the Child and Adolescent Statute provide for the possibility of calling the Guardianship Council in case of refusal of vaccination by those responsible for a child, Levi says that dialogue with clear information should be the main instrument of professionals in the field. health and education who encounter incomplete vaccination books.

“The guardianship council is a last resort. The first instance is information, information and information. When a child comes to school with an incomplete card, parents and guardians should be called, talk to them. It is very important to have an eye-to-eye conversation. eye, because we know that health professionals have a high level of reliability in our country “, he said. “If we do all of this, I’m sure that most parents and guardians will catch up on their children’s vaccinations.”

Covid-19. Germany may be one of the first countries in Europe to start mass vaccination – Executive Digest

Nutrition in Practice: Food in the prevention of breast cancer

World Psoriasis Day: about 3% of the population has the disease in Brazil

Vaccination Campaign against Polio and Multivaccination are extended until November 21

Covid-19: looking for a vaccine | Paths of Reporting | TV Brazil

Polio vaccination campaign will be extended until November 30

Level-5 may be closing its doors in North America

Luis Arce, virtual elected in Bolivia, on Evo Morales: ‘He is...

THE BALL – Dragon in Manchester with high alert (Champions League)

Police infected with coronavirus are returning to work by order of...

Palmeiras defines compensation that exempts Junior from the obligation to buy...