At the age of 52, the doctor Ariadna Muniz is facing a great challenge: to manage a new ophthalmological complex in Belo Horizonte, which serves those who need specialized medical assistance with excellence. In her luggage, the specialist takes nearly three decades of experience as an ophthalmologist and the last 15 years at the head of the Hilton Rocha Hospital, through a Conduct Adjustment Term (TAC) signed between the Public Ministry (MP) and the Educational Society of Brazil (Soebras). It was there that the professional, a member of the Brazilian Council of Ophthalmology (CBO), took up residence in 1996 and started the love story with the health unit installed in Mangabeiras, in the Center-South of the capital.

In this interview with Nowadays, Ariadna Muniz talks about the trajectory, the partnership with the Hilton Rocha Foundation, completed on the last 14th, and the plans for the recently opened ophthalmological complex installed in the Santa Efigênia neighborhood, in the hospital region of the capital.

Why did you choose a medical career specializing in ophthalmology
Initially, I did proof of residency for dermatology and ophthalmology. I always liked these two areas in college. But after we start to study the eyes, it’s passion. Those who have never seen do not know how it feels. When, with study and knowledge, you help a person who has lost his sight to see again, it is an immediate satisfaction. The result you see immediately. You have effective actions with effective results. It is a specialty in which I am doing and, within it, I can work both in public health and in the area of ​​education.

During the Covid-19 pandemic, there was a reduction in medical visits. Is it the same scenario in the eye area? Does the situation worry?
We have been on the alert since March, when we started experiencing this pandemic. Certainly, people who have annual control, but do not have diseases such as glaucoma or diabetes, have reduced demand. Those who are over 65 have also stopped going, they only look for them in an emergency. The surgeries have reduced. The Municipal Health Department itself left open the possibility of emergency procedures only. Then, we started to gradually return with 30%, 40% of the volume we served. But failing to do the control worries. The person is in a pandemic, but chronic diseases still need control. In addition, the ocular apparatus can be entered by the new virus. Therefore, we do not stop the calls. The population can rest assured that medical services have adopted rules to avoid contagion, such as distance and the use of PPE (Personal Protective Equipment).

Through a partnership with Soebras, you ran the Hilton Rocha Hospital for 15 years. What was the great challenge in continuing the work carried out at the health unit?
When we arrived to take over the unit, in 2005, the Health Surveillance was also there, to seal the hospital, which, in fact, was already closed and had even lost the operating license. That’s when the battle started. To reverse the situation, the Health Surveillance scored 36 items that we needed to improve in the building and the deadline for this was only one month. We were able to settle the debts that the foundation had with employees, suppliers and labor. The amount reached R $ 1.5 million. The only existing debt today is tax, of about R $ 2 million, which entered Refis (a program that allows renegotiation of debts with the possibility of monthly installments). But, in general, the big challenge was to rescue and do cutting-edge ophthalmology in this hospital, which has always been a reference throughout the country and even outside Brazil. In the last 15 years, we have reached more than 2.5 million calls.

There, more than 90% of visits were made by the Unified Health System (SUS). How do you evaluate the ophthalmological service in the country, especially the public, which is always the target of many complaints?
SUS is the best health plan in existence. Whoever works in the system needs to provide care, listen to the patient, humanize the SUS. SUS works like this, it is not a financial means. The table of services paid to providers has been out of date for years, but it is essential to maintain quality. It was gratifying, when we resumed Hilton Rocha through SUS, to have had the opportunity to excel in quality service, investing in state-of-the-art technological equipment and, above all, having a team of excellent professionals.

Does the new ophthalmic complex, which is maintained by Soebras, intend to serve by SUS?
Yes, we have already applied and we are waiting for a public call for the accreditation of new services to be published by the city. We had a meeting with the Health Secretary of Belo Horizonte (Jackson Machado Pinto) and he said he was very concerned. After all, he received a recommendation from the MP (Public Prosecutor’s Office) to suspend the agreement with the Hilton Rocha Foundation without having another service to absorb the demand that was emerging and is now being redistributed.

I am sad because the Hilton Rocha Hospital no longer exists and, in a short time, we should no longer have the building where it worked for years. But we remain strong, taking the teacher’s story. He was a unique person ”

In the meantime, how are the patients being monitored at Hilton Rocha being cared for?
We do not close the doors to those who come to us, regardless of whether the SUS is released or not. We have every interest in continuing this service that we have provided with such excellence over the past 15 years. I was impressed with the line of patients at the institute’s door where they are being directed by the current management of the Hilton Rocha Foundation, without making a flow. I saw patients crying, complaining. It hurts us. When we were ahead of Hilton Rocha, we didn’t have that. In the last 15 years, we have not heard complaints and even the MP has always said, in several meetings, that we did excellent service. But it hurts even more to see the president (of the Foundation) asking for donations to resume his services. We never ask for donations, we always invest. As it is now, the patient is lost without consultation, without care, without medication and without this care, which is the most important. What took me to do medicine was taking care of the patient. This attention is not being given to those we have followed for 15 years.

Two months ago, calls started to be made in a modern building in the hospital region. Why was the change necessary?
Since we took over, we knew that we couldn’t make many changes to the hospital building in Mangabeiras, due to the fall of Serra do Curral. Because of that, the works were very limited, we could only reform. But when work was started on the neighboring land, the structure was very shaken. Before there was no crack, nor had the land yielded as it did. From July 2017, cracks began to appear on the walls, glass began to break. We have reports proving the expansion in the area and, in the rain of last year, the Civil Defense found problems. Those responsible (for the interventions) hired a foreign company to carry out works and avoid major problems. We signed an agreement for them to start last February, but that did not happen. The space only got worse and the building’s situation became more unstable. It was at risk for both employees and patients. Afraid of falling apart, we communicated to the Municipal Health Secretariat and filed a lawsuit, sending e-mails. We didn’t get any answers. So, we thought it best to go to this building with a new structure, even bigger than the previous one. We partially changed with outpatient care, exams and departments (urgent and emergency, eye drops), precisely to avoid a catastrophe. We saw a delicate situation.

Some ophthalmological units that serve by SUS in BH are in deficit. Some manage to make a small volume of assistance, others have broken equipment “

But how did this building depredate?
I would like to emphasize that, in various media, the current president of the Foundation said that we left the building in a situation of total precariousness. This is untrue, a lie. We have documentation and images that show the structure when we receive it and when we deliver it. He also said that we looted the equipment. However, the TAC signed with the MP said that the devices acquired in this 15-year period, the investments made, would be incorporated into the Foundation if the agreement were renewed, which did not happen. This is expressed in the adjustment term. When we took over, we took the inventory and the equipment in this document was left there, it cannot be dispensed with. It is worth mentioning that, when we arrived, there was practically nothing in the hospital, just old equipment.

How will it be going forward?
Change is always challenging. We are aware of the magnificent work we did at Hilton Rocha. More than 130 professionals graduated there, as residents, and left with the name of the institution. Now, we will continue this work, regardless of where we are, our greatest asset, and that no one takes away and is unquestionable, it is our clinical staff, the excellence of the services. We are in more modern facilities and with a heart full of joy because we know that we will continue to provide a moral, ethical and quality service. 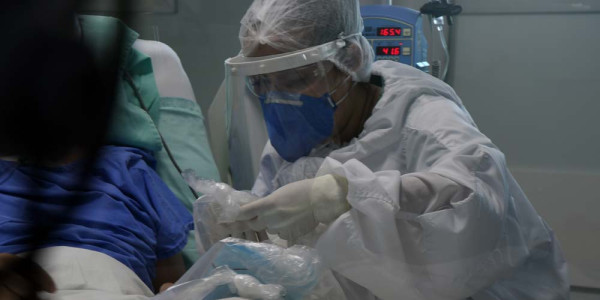 Most of the fatal victims of Covid-19 are men, cardiac and aged between 70 and 79 years old

The challenges of HIV in pandemic times

Deaths from dengue fever in the state increase 30% in 2020

Smoker’s throat can be a disease with high mortality

Banco do Brasil launches Pix on WhatsApp; know how to...

How much should Palmeiras receive for Bruno Henrique’s departure for Al-Ittihad?

COVID-19 | Anvisa issues note on ozone use against coronavirus

Portuguese raised more than a thousand euros after living a week...

Big Sur MacOS will be released to users from next Thursday...