With the intention of bringing customers closer together and encouraging solidarity, newsstands from capital they are collecting plastic caps from pet bottles to make donations to charity and assistance entities that are part of the Tampinha Legal program. The group is made up of newsstand owners and employees – who also consider themselves newsmen due to the proximity and sale of newspapers. In total, there are about 70 units spread throughout the Capital.

– We started collecting the caps in November last year and have already made three deliveries. The last one took place on January 30, at the Instituto do Câncer Infantil (ICI). We managed to deliver 120 bombons – says Cristiano Fabricio Catelan, owner of the newsstand on the corner of Avenida Assis Brasil and Rua Tapajós, in the North Zone.

Owner of a newsstand on Avenida Assis Brasil, on the corner of Rua Edmundo Bastian, Isabel Catelan, 49, sister of Cristiano, says she already collected and donated caps, but decided to take the idea to the group of newsmen.

– Cristiano and I thought about how everyone together could help. It is a way to improve our business with the participation of customers who spend here every day – says Isabel, and her brother adds:

– We approached many people who left the material in the stall. Even the children already know the value of the donation and bring their caps when they are going to school. 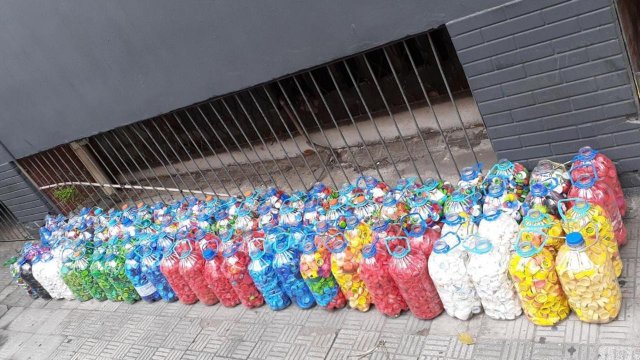 According to Cristiano, for each planned donation, one of the participants chooses the institution where the caps will be taken:

– At first, we donate to a church. Then, to the Support Association for People with Cancer (Aapecan) and, finally, to the Instituto do Câncer Infantil. We want to help several entities, and it costs nothing, because the bombona does not occupy much space.

Inspired by the good deed, the newsmen think about other activities, in addition to the collection of caps.

– We think of helping more. For example, with the donation of blood – says Alexandra Nair Etchebarne Paz, 34, owner of a bank on Avenida Protásio Alves.

According to Cristiano, one of the next actions is the collection of milk cartons:

– One of the members of the group informed us that the Casa de Apoio Madre Ana needs milk. We have already started collecting and, as soon as we can, we will deliver. The collection of caps continues.

Soon, according to Cristiano, the group of newsstands will have disclosures on the internet for people interested in participating:

– But, for those who want to help, just look for one of the stalls in Porto Alegre and get information.

/// Plastic caps can be left on newsstands in Porto Alegre.

/// There are about 70 newsstands that collect and pass on to institutions.

/// Every society can participate, taking the caps to the collection points (stalls participating in the action).

/// The entities themselves separate the caps by color – because there is differentiation of values. If they are delivered mixed, they lose added value.

/// The recycler buys the caps. The entity receives payment.

/// After a sequence of processes, this material is sold to the industry and is transformed into other products.

Read other news from the section Your Problem is Ours

At least eight killed in two shootings in the German city of Hanau. One person was arrested – Observer

Petrobras gains efficiency and profits R $ 40 billion in 2019, the largest in history

BBB20: Lucas reveals that he left a surprise and exposes details: “gonna stink”

‘Short type Anitta’: know what is disturbance of tranquility – Horizontes

BLITZ – Duran Duran and A-ha at Rock in Rio-Lisbon. The complete poster of the day that was missing

12 rides to enjoy Carnival without spending a lot

In return, Ocon feels faster cars: “We will beat all records”...

Do you have a current account? BdP recommends that you check...

Still without Neymar, PSG thrash Dijon and go to the semifinal...

Check out the Easter eggs from the last episode of Arrow

US Secretary says he is interested in nuclear projects in Brazil